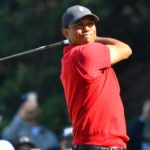 Tiger Woods is steeped in the golfers and tournaments that came before him.

Michael Bamberger is back on the road, keeping two club lengths from his sources. This is the fourth installment in a five-part Bamberger Briefly series from South Florida, about golf’s return to action. You may read part 1 here, part 2 here and part 3 here.

JUNO BEACH, Fla. — Golf mashes time. These made-for-TV charity events — the one last Sunday at Seminole and this Sunday at Medalist — could be lost episodes of “The Twilight Zone.” It’s easy to imagine Phil Mickelson and Tom Brady a few days from now, golfing big and living large. But can’t you also imagine Walter Hagen and Babe Ruth in those same roles? The Haig and The Babe, golfing big and living large, lifting people in times of war, depression, plague? They were giants.

During the five-hour Seminole telecast, six names were in circulation: Donald Ross, Ben Hogan, Dustin Johnson, Rickie Fowler, Rory McIlroy and 21-year-old Matthew Wolff, swinging, most assuredly, in a way that’s all his own. Hogan (who liked to play and practice at Seminole) and Ross (who built it) lived through the 1918 pandemic. Ross grew up in remote northern Scotland, and some of his Seminole greens and bunkers are straight outta Dornoch, where golf’s been played for 400 years.

When Greg Norman and Pete Dye were designing Medalist in the mid-1990s, they took inspiration from the West course at Royal Melbourne, designed by Alister MacKenzie in the mid-1920s. Tiger played it masterfully at last year’s Presidents Cup. Of course, he has a well-established knack for playing MacKenzie courses. What’s new here?

Let’s bring in Michael Murphy, in Golf in the Kingdom, before you even get to the first page: “The game was invented a billion years ago — don’t you remember?”

Murphy fell for the game at Pebble Beach. Talk about ageless, the course and the man. I remember Bill Murray, at the AT&T Pebble Beach Pro-Am, some years ago. A fan told Murray that he’d been following him for five years, looking for an autograph. “Five years is nothing,” Murray said. He gestured widely. “Look at these trees. Look at the ocean.” Oceans are old.

There’s a lot to be said for living in the present while remembering the past. (We’ll learn from the future when we get there.) Tiger is steeped in the golfers and tournaments that came before him. Rory is, too. In 2018, they played together on the Sunday of the Tour Championship, at East Lake. On the last hole, as Woods was marching to his first win in five years, fans flooded the fairway, trying to get near him. It was bedlam.

“This is like Jack in ’80 at Baltusrol,” Rory said to Tiger as they sped down the final fairway. On the last hole at the 1980 U.S. Open at Baltusrol, where Nicklaus won his fourth U.S. Open, fans were swarming him. It was bedlam.

“Yeah,” Tiger said. “I just don’t have the tight pants and the hair.”

This month, each has his own Sunday. Rory the one that just passed, Tiger the one coming up.

I repeat this next part from that Seminole story because it says so much about Campbell and Hogan while doubling as timeless parenting advice. Campbell had six children. They weren’t interested in golf. One day he packed them into the family wagon and brought them over to Seminole, to watch Hogan practice. The father gave these instructions: “Don’t ask him anything. Just watch. You don’t have to have a good time. Just remember it.”

A day or two after that piece ran, I heard from Ted Emerson’s Boston neighbor, who noted that Ted had a Volvo wagon, its back seat filled with folders about USGA rules decisions. I heard from Billy Joe Patton’s grandson, describing the pride his grandfather would have felt, with the Walker Cup coming to Seminole next year. (Patton played in five Walker Cups and captained one.) And I heard from one of Campbell’s daughters.

“You correctly state that we were not so very interested in golf,” Victoria Campbell Collins wrote. “However, the nature of the game and the standards it demands were an allegory for much more than simply golf. It was a game of civility, beauty and precision. The game has morals and yet it offers freedom. My father always found his peace when playing golf.”

Forty years from now, Matt Wolff will likely be saying the same thing, although, most assuredly, in a way that’s all his own.