5 things you missed Thursday morning at The Open Championship 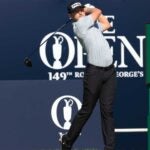 Mackenzie Hughes is the early leader at The Open.

The 149th Open Championship began in the wee hours of Thursday morning here in the United States, but while you were sleeping, there was plenty of action happening at Royal St. George’s. Here’s everything you need to know to get caught up on the early action.

1. Journeyman in the lead

Mackenzie Hughes is setting the early pace at Royal St. George’s as he holds the lead at five under through 13 holes. Hughes is playing in his first Open Championship, so this is a bit of uncharted territory for him. However, as history shows, Cinderella stories are not uncommon at Royal St. George’s. Ben Curtis will tell you that.

2. Spieth in the hunt

Jordan Spieth has had a redemptive 2021 thus far, but his next major title has still eluded him. Will The Open serve as the stage for his return to the top of the sport? Early returns have been promising. Spieth is currently three under through 13 during his opening round and sits firmly in the hunt. The three-time major winner’s day got off to a pedestrian start as he was one over through four, but four straight birdies from Nos. 5-8 got Spieth to three under at the turn. He’s yet to card a birdie on the back nine, but still sits just one back of the early lead.

It’s a major week, and Brooks Koepka is yet again playing some extremely solid golf. Koepka didn’t light the course on fire in the first round, but an opening 69 is a terrific way to start a major championship. He made three birdies against two bogeys to get in the house under par for the day, and he will almost certainly be a factor this weekend.

Bryson DeChambeau’s bomb-and-gauge strategy has not paid off thus far in the opening round. Through 14 holes, the 2020 U.S. Open champ has been in the thicket far more than the short stuff, hitting only one fairway on his first 12 holes. As a result, his score suffered early. DeChambeau was two over on his opening nine, but thanks to a more controlled approach on the back nine, he has battled back to one under through 14.

5. The course is gettable

It’s still quite early, but thus far Royal St. George’s has been scoreable. Thirty-three players are under par in the early going, and there has yet to be a score posted in the 80s. With the weather in links golf known to change at a moment’s notice, these conditions could be short-lived, so players will hope to get their birdies while they’re available.