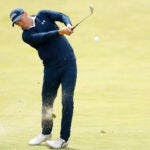 Spieth vaulted into contention early at the Open

Jordan Spieth had the juices flowing early at the Open Championship, vaulting himself into contention early before most golf fans in the U.S. even woke up.

Starring in the featured group alongside Bryson DeChambeau and Branden Grace, the 2017 Open Champion played his first four holes in one over, then rattled-off four consecutive birdies, sending Golf Twitter into a momentary tailspin.

The catalyst for the run started on the 5th hole: Short of the green in two on the 408-yard par 4, he knocked-in a long, right-to-left putt for birdie.

Spieth, who ranks first in one putts and scoring average at the Open Championship since 2015, according to golf statistician Justin Ray, finished the front nine with a three-under 32 and was inside the top 5 at the time. Brian Harman, the leader at the time, put together his own similarly-impressive run with four birdies in his first five holes. His approach on the 5th hole was perhaps his shot of the day.