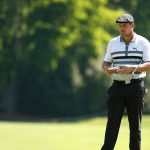 Bryson DeChambeau enters Sunday just outside of the top 20 after a wild Saturday morning criss-crossing the United States.

We’ve reached the final round of play at the 2021 Wells Fargo Championship. Below, find everything you need to know to watch on Sunday, including tee time information for every player in the field.

Bryson DeChambeau is a ways from contention heading into the final round of play at the 2021 Wells Fargo Championship, but in fact, it’s a miracle he’s made it this far.

DeChambeau found himself jet-setting around the United States on Friday and Saturday to make his 8:10 a.m. tee time on Saturday at Quail Hollow — and not by his own volition. The reigning U.S. Open Champ made the cut at the Wells Fargo only after boarding a return flight to Dallas convinced he’d missed it. As a result, he wound up on a last-second, overnight flight back to Charlotte landing just in time to make it to the first tee.

DeChambeau (-2), enters Sunday seven strokes back of the leader, Keith Mitchell (-9), who is looking for his second PGA Tour win. Also in contention is Rory McIlroy (-7), who’s looking for his first victory on North American soil since the Tour Championship in 2019.

Below are the tee times for Sunday’s final round; you can catch the action on Golf Channel from 1-3 p.m. ET and on CBS from 3 p.m. till the completion of play.