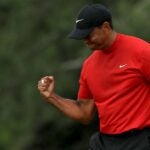 Tiger Woods makes his Masters title defense, and 20 other things you need to know about the 2020-21 season.

With Dustin Johnson’s win at the Tour Championship, the end of the 2020-21 PGA Tour season is here. Yes, after a pandemic-forced stoppage, an incomplete Players Championship and an Open Championship forfeited entirely, we’ve officially reached the end of a wacky 2019-20 season.

Pay no mind to the pair of majors we’ve yet to see, the 2020-21 season is upon us, and it’s time to take a deep dive into the 21 things you NEED to know about a brand new season in golf.

6: Major championships contested over the span of the 2020-21 season (two U.S. Opens, two Masters, one Open Championship and one PGA Championship).

8: Events slated for the state of California, the most of any state or region on the 2020-21 schedule.

1: Events held on the continent of Asia. The pandemic forced the PGA Tour to move the Zozo Championship to the United States and cancel the WGC-HSBC Champions, leaving only the Olympics in Japan on the schedule.

2: Masters held at Augusta National — in the span of six months! That almost makes it worth the wait to see Tiger Woods defend his title.

40 years: The 2020-21 season marks the 40th playing of the Honda Classic, the longest-running title-sponsored event on Tour.

*All dates 2021, unless otherwise specified

May 19-23: PGA Championship at Kiawah Island

1. Winged Foot Golf Club: In true U.S. Open fashion, Winged Foot should prove an old-fashioned brute. Gil Hanse’s 2017 renovation of the west course should bring out the most compelling elements of A.W. Tillinghast’s masterful 1923 design — to say nothing of the USGA’s typically diabolical setup.

“If it gets firm like some of the USGA guys told me they want it to be, I don’t see how any of us shoot under par,” Jon Rahm said at the beginning of the month. “Or if we shoot under par, it would be somebody winning by a lot.”

2. Augusta National: Sure, it might be a bad year for the azaleas, but the November Masters is our first-ever look down Magnolia Lane in the fall months. That’s must-see TV.

3. Muirfield Village Golf Club: The Memorial Tournament in the first week of June could prove even more entertaining than usual in 2021. The second phase of MVGC’s two-year renovation will be complete just in time for the Memorial, giving fans an up-close look at Jack Nicklaus’ newly shaped design opus.

4. Torrey Pines: Speaking of renovations, the finishing touches of a $15 million Robert Trent Jones-led renovation will have just been placed when Torrey Pines welcomes golfers for the 2021 U.S. Open.

5. Caves Valley Golf Club: Not only will Caves Valley host the penultimate event of the FedEx Cup playoffs, but the BMW Championship host will also mark the final opportunity for players to earn Ryder Cup points. With six captains choices this year (as opposed to the traditional four), the pressure to lock in one of the six all-important guaranteed spots should raise even higher.