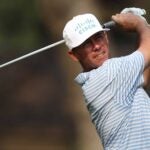 Chez Reavie knows the struggles that greet golfers in both getting and keeping their tour card.

Like any other professional sport, it’s really freaking hard to become a PGA Tour golfer. Whether you’re traveling through Q-School, the Korn Ferry Tour, or relying on sponsor’s exemptions, it’s near impossible to wind up on Tour on accident. Earning one’s Tour card requires a dogged intersection of talent, consistency and most importantly, execution.

But unlike other professional sports, it might be even harder to stick around on the PGA Tour. Once you’ve found your way onto the world’s most competitive golf circuit, your job has only just begun. It’s not nearly enough to stay the course, you’ve got to elevate your game even further — outperforming your counterparts and continuing to rack up strong finishes — if you’re going to hang around.

So, is it harder to earn your PGA Tour card, or to keep it? In this week’s Subpar, PGA Tour pro Chez Reavie posits his argument on the age-old question.

“I’d say the pressure’s similar,” Reavie said. “I think the hard part is knowing how good it is on Tour, knowing how much fun it is, how great all the events are. Knowing that you might not have that anymore, you feel a little bit more pressure because you want it more and you’ve kind of tasted it a little bit.”

As Reavie explained to Colt Knost and Drew Stoltz, playing on the PGA Tour is a lot like flying first class — once you’ve done it, you never want to go back.

“Whereas when you’ve never been out there and it’s always been a dream, you think it’s going to be cool but you don’t know what to expect,” Reavie said. “You’re just working hard to try and get there. Once you know you have it and you can possibly lose it, I think that’s a little bit harder.”

For Reavie and the countless others who’ve battled to keep their Tour card over the years, it’s a sign of status as much as it is a sign of dedication.

“It’s just mainly, we’ve practiced and we’ve worked so hard, you want to play against the best in the world,” Reavie said. “That’s the ultimate challenge, and when you feel like you might not have that opportunity, it can be pretty upsetting at times.”

To watch the rest of Reavie’s interview, including what it’s like to stay in the Crow’s Nest at Augusta National, and how many holes-in-one he’s gotten over his career, check out the video below.

‘Phil was not missed’: Former champ speaks out about PGA Champions Dinner