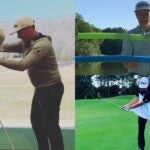 Mark Blackburn has become one of the top instructors in the game.

It’s not always easy, when one door closes, to recognize where the next one might open. PGA Tour coach and GOLF Top 100 Teacher Mark Blackburn remembers a few quite literal doors very well. There was the side door and clattering garage doors of the maintenance shed at Gunter’s Landing GC in northern Alabama. Blackburn spent his late-’90s mini-tour days relentlessly working on his game at the course, sleeping in the shed’s loft and slipping in and out of that side door for the occasional late-night pint.

“The thing is,” Blackburn says, “If you went out on a Friday or Saturday night, the crew still had to mow the greens the next morning. So they rolled up those garage doors at about 5 a.m. and that’s all the sleep I was gonna get. Time to practice again.”

These days, Blackburn starts most of his mornings by sliding open the doors of his own at the Blackburn Golf Academy, 90 miles south in Birmingham, at Greystone Golf & Country Club. The enterprising swing coach no longer chases tiny paychecks and frosty pints on mini tours; he crisscrosses the country for PGA Tour events, where he supports a stable of big-name players that includes Chez Reavie, Kevin Chappell, Charley Hoffman and 2003 Masters champion Mike Weir. Still, the heart and soul of his work is in Alabama, where the UK-born expat has made a home for himself and where, last October, he was named 2020’s PGA of America Teacher of the Year.

Embers that sparked his coaching career were nestled in the ashes of a playing career cut short by injury. In 1999, Blackburn was at Betchworth Park, the course he grew up on in Surrey.

“I hit a shot on the 12th hole and it felt like someone had stuck a knife in me.”

He was 24 at the time. Rehabbing his badly damaged left wrist seemed insurmountable, so Blackburn turned to teaching full time. His clientele? “Everybody and anybody,” he says with a laugh. “I’ve taught a lot of s— players.” His big break came in early 2005, when his mini-tour pal D.J. Nelson — who’d begun carrying Heath Slocum’s bag — suggested that his struggling pro give Blackburn a call.

Blackburn hopped in his car and headed to New Orleans. Slocum hadn’t posted a top 50 in his eight most recent starts, and he missed another cut at that week’s Zurich Classic. But in working with Blackburn he found that elusive something. Slocum ripped off 17 of 18 made cuts the rest of the year, posted four top 10s and capped things off with a win at Mississippi’s Southern Farm Bureau Classic. In Slocum, Blackburn had a precocious student and, he says, “My golden ticket” to the big Tour.

Whatever Blackburn lacked in playing ability, he made up for with other gifts. Availability, for one. Even when he was competing full time, he made himself the go-to guy for mini-tour friends looking for a helpful swing thought. Adaptability, for another — the ability to meet the needs of players of all stripes.

“You have to be a chameleon,” he says. “I’ve been to night clubs with some players and to church with others.”

Or back to the door metaphor: The one you need to walk through isn’t always the one you anticipate. Blackburn ticks off unforeseeable big breaks: a chance lesson with Robert Karlsson, which turned into a multiyear run that saw the big Swede climb to No. 6 in the world. A union with Chappell, who Blackburn ushered from PGA Tour newbie to world top-25 player. A team-up with Reavie, who Blackburn picked up when he was in the wilderness (battling injury, off the PGA Tour and low on confidence) and helped him back to the winner’s circle. Blackburn is athletic, which helps when he’s describing ground forces and making cross-sport analogies. He’s built for stress, too, unaffected by the trappings of demanding Tour pros and unbothered by the woes of 18-handicappers.

“Anyone who wants to teach should work with a bunch of bad golfers,” he muses. Regardless of bank account or handicap, understanding that relationship at impact is the entire game. Learning to see patterns and make adjustments on the fly? That’s what makes a teacher helpful to his student.

“I create a vernacular with each player,” Blackburn says. “We speak a language that isn’t always suitable for print. Charley and Chappy like to converse using — ahem — ‘colorful’ metaphors, whereas Chez and Weir want things more straight up. Every player has his or her own personality.”

The PGA of America honor signifies a distinct level of career achievement in coaching. But for Blackburn, now 45, things are just getting started. He likes the idea of developing a coaching tree—nurturing teachers at his academy, then watching them find success on their own. He likes the big picture of improving the coaching game, because he likes the small picture of coaching golfers who want to improve.

Blackburn’s tech savvy measures up against just about anyone in the business. Still, he sees his biggest value in the people skills he has developed in his decades of doing. That’s why he’s fired up for the decades to come.