For 10 years we’ve thought what could have been for Tom Watson at Turnberry. All of us except Tom Watson 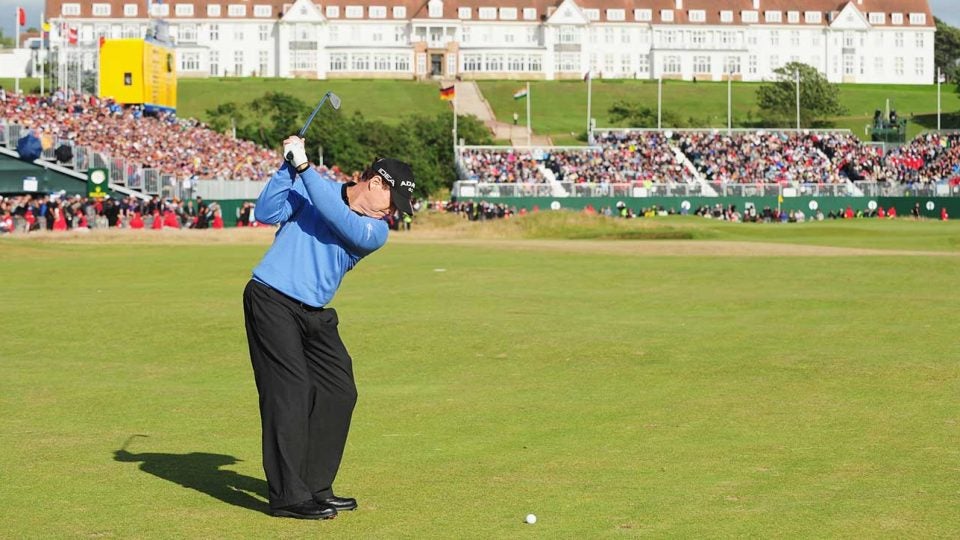 Tom Watson hits his approach shot into the 72nd hole at Turnberry during the final round of the 2009 Open Championship. Watson made bogey and lost in a playoff.
Getty Images

A golfing lifer, asked once what he likes best about the game, said, “The ball in the air.”

We all know how that goes. That golf ball is in the air, and you can guess where it might finish. But you can’t know. And so it was for Tom Watson, playing his second shot on the baked, short, downwind par-4 18th hole on Sunday in the 2009 British Open at Turnberry, on Scotland’s toothy west coast. He had 164 yards to the front of the green, 189 to the hole, 196 to the back, and an Adams 8-iron in his hands, hands that have launched a million shots, but few more significant than this one.

If you know Watson, you know the pose: arms against his rib cage, staring the shot down, his whole body alert. Have you ever hit a shot, one that counts, DSP (dead solid perfect)? Take that feeling and multiply it by a thousand and you have Watson, then and there. “When that ball was in the air, I said, ‘I like it,’” Watson said recently. “I literally had a flashback. It was exactly like I had hit it in ’77.” That is, his approach shot on 18 in his Duel in the Sun Open win at Turnberry, when he was 27.

Talk about your good vibrations. In the final round in ’77, Watson hit his second shot on the last stone dead and made a birdie to win by a stroke over Jack Nicklaus, his playing partner, who closed with a birdie himself.

Ten years ago, Watson was looking for a closing par to seal a one-shot win over Stewart Cink, in the house at 278, two under par. Cink had made a birdie on the last for 69, punctuated by a hearty fist-pump (this was near the end of Tiger I) while wearing a Kermit-green hat and matching shirt. The pin was in the back right, and if Watson’s ball finished hole-high he would likely get down in one or two and raise the jug. That’s what Watson was thinking, what Cink was thinking, what everybody was thinking.

Or nearly everybody. A moment earlier, before Watson pulled 8-iron after a brief mental flirtation with 9, a sportswriter on the edge of the 18th fairway asked another, “Will this be the biggest event you’ve ever covered?”

A passing and necessary aside, because before this Sunday — July 19, 2009 — is over, you will know everything you need to know about Tom Watson and the game that defines him. The list of people Watson truly admires is not long, but Nicklaus is near the top of it, in part because of how he handled his wins and even more his near-wins. (In professional majors, 18 wins, 19 seconds.) When Watson won at Turnberry in ’77, he and Nicklaus walked off arm-in-arm, and Nicklaus said, “I gave you my best shot, but it wasn’t good enough.” When Watson beat Nicklaus in the 1982 U.S. Open at Pebble, Nicklaus said to him, “You little son of a bitch.” The point here is that golf, when it’s done correctly, requires honesty, humor — and grace. (The original Big Three.) Nicklaus got the message from Bobby Jones, and also from Arnold. Nicklaus gave it to the generation of golfers that succeeded him, and some of course got it more than others. Before that Sunday was out, Watson’s deepest golfing values, whether he won or didn’t, would be on display for the world to see.

The ESPN/ABC gang — Curtis Strange, Andy North, Mike Tirico, others — spent that Sunday morning trying to find the right words, in case Watson did win. North, a close friend of Watson’s, walked the final 36 holes with him, microphone in hand. In North’s mind, a Watson win would be the most significant golf victory ever. Strange, with no sentimental attachment to Watson, actually felt more. He said then that a Watson win would be “the greatest sporting victory of all-time.” Cink had been following Watson through the week with a fan’s interest. He grew up on Watson and he woke up on that Sunday in a tie for sixth, three shots behind the man. Cink wasn’t thinking about winning. He was thinking, “If Watson wins, it’s the greatest sporting event in the last 20 years.” He and Watson had played a practice round together three months earlier, at Augusta. Cink saw that except for length, Watson still had a Tour-level game.

Discussing that 2009 Open with Watson today is like talking to a funhouse mirror. He will make no allowance for his age then or for being 25 years past his prime. He won’t even acknowledge that he was attempting to do something audacious. “Great champions don’t see barriers,” Cink likes to say. That sentiment explains how Watson approached the week then and how he looks at it now. There might have been three people who could see it coming: Watson, Watson’s caddie and Stewart Cink. And possibly Sergio Garcia, with whom Watson played in the first two rounds.

Garcia gave Watson a meaningful pep talk, early in the Friday round, after Watson had made a second bogey: “Come on, old man.” Of course, that comment was part of the running gag, too, and Watson played along. After his first-round 65, he told a BBC reporter, “Not bad, for an almost 60-year-old.” But there’s always been a significant gap between Watson’s public and private selves. He was staying in the Turnberry hotel, in the Tom Watson Suite, with his wife of 10 years, Hilary. On the eve of the opening round, he told her, “Hils, I could win this tournament.” He knew the course, had enough length for it — and every part of his game was open for business.

This ain't a funeral, you know.

It was all working, and that final 8-iron approach shot was flushed. It dropped out of the blue sky and landed on the very front of the 18th green. But tournaments turn on little things. “The moment it landed, I immediately started preparing mentally for a playoff,” Cink said recently. “That ball had to land five to 10 yards short of the green. That’s how firm it was. I knew it was going over, and I knew it was a tough up-and-down from over that green. That was Tom’s blink. I think his age might have been a factor. He should have hit a 9-iron. He didn’t think the shot through.” Cink wasn’t being mean-spirited. He was offering his honest assessment.

Watson’s ball finished about a foot over the green. About a quarter of his ball was sitting in fluffy grass. He faced a short, slightly downhill shot. He chose to pop it out with a putter. Nicklaus, watching from home in South Florida, thought Watson was making the right play, choosing the club that could not cost him the tournament. Cink said he would have used putter there, too, “a hundred times out of a hundred.”

Watson’s chip-putt was fair at best and his ensuing 10-footer to win was short and right from the get-go. Cink put on a clinic in the four-hole playoff — par, par, birdie, birdie — and Watson played like a man out of gas, though he maintains he was not.

You could say the playoff was anti-climactic, but you could also say that the best parts came after it. Watson’s warm, prolonged 18th-green handshake with Cink. (Nicklaus playbook.) His opening press-tent comment to reporters: “This ain’t a funeral, you know.” (Palmer.) The understated, heartfelt acknowledgement of the ovation he received on his commercial flight to London the next day. (Hogan.) His personal responses to the many letters he received. (Jones.) All that is golf, too.

Watson, a son of Midwestern prosperity, reserved by family tradition, doesn’t talk often about that Open from a decade ago. If a pro-am partner asks about it, Watson obliges, of course. Ryder Cups, the same. But most golf fans want to talk to Watson about his wins, about Pebble Beach and the Masters, about Trevino, about Nicklaus. In their years together, Neil Oxman, Watson’s caddie since 2003, can only remember one time that Watson initiated anything about the 2009 Open. They were driving around Crater Lake in Oregon, there for a tournament, about a month after the events at Turnberry. In the middle of nowhere, apropos of nothing, Watson turned to Oxman and, to get it down to a single word, said, “Almost.”