Hire me! Why this ‘Caddyshack’ star wants to caddie at the U.S. Open at Winged Foot 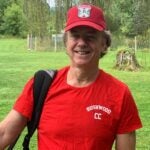 Michael O'Keefe, who played Danny Noonan in 'Caddyshack,' is seeking his biggest caddying gig yet.

When I auditioned for the role of Danny Noonan in Caddyshack, the producers asked me two questions:

Can you play golf? Can you caddie?

I lied that I could play golf. I had to learn quickly, and thanks to Tom Nieporte, the pro, and his son, Joe, and Tom’s assistant, Dave Schulz, I managed to cobble together a swing. The best I ever got was to about a 12 handicap. These days, when asked what my handicap is, I reply, “I was raised Catholic.”

As for my caddying experience, I could be truthful. I had caddied at Winged Foot in 1971 and 1972, having grown up only 15 minutes away, in the village of Larchmont.

Now, almost a half-century later, I’m ready to take my caddying to the next level. I’m serving notice that I’m available for, interested in and worthy of carrying a bag for any professional (or amateur) in the field at this year’s U.S. Open.

Why now? If not now, I may never have another chance! I’m 65 and not getting any younger, though my wife tells me I’m still devilishly handsome.

I caddied at Winged Foot when Claude Harmon was the pro, and the other Harmons — Butch, Billy and Craig — were still in their twenties.

To this day, when I hit a trap shot, I think of Claude’s advice to maintain a light grip on the club as you swing through, but to actually let go of the club from the downswing to just before contact, whereupon you must pull the club through and take a dollar bill-sized patch of sand, keeping the ball where George Washington’s face would be.

While I wouldn’t be hitting any shots at Winged Foot Open, I do pledge to give advice — both solicited and unsolicited — to the golfer who gives me the chance to loop for him.

Full disclosure: I wasn’t the best caddie in my time. That distinction goes to a guy named “Tasty,” who earned his name from his penchant for wine, plus his wicked sense of humor. When the legendary caddiemaster, Gene Hayden, would notice that Tasty had been drinking, the caddie would be sent “down the hill.”

Translation: He had to leave the club and make his way home.

In case my prospective boss is curious, here is my take on the course. The first four holes will test everyone’s confidence and putting skill. Get off the 4th green at even par and you’ve got a chance.

Did I mention my brother Bill is a member and former president of the club? Well, he is, and I’m sure he’d appreciate me having a job considering that I still owe him money from a skins bet when we last played. I’m prepared to have my fee garnished to repay that debt. There’s nothing more important than family.

Speaking of which, my father was the reason that I got the caddie gig. He and Gene Hayden knew each other well. That put a heck of a lot of pressure on me, because if I were to mess up, my father would find out.

If I’m not mistaken, we were paid $12 for each bag we carried 18 holes, so you always wanted a two-bag loop, which was given only to the adult caddies. Let me tell you, after 36 holes, $25 or $30 was quite a payday back then.

Back to the course.

The 5,000-yard 9th hole will blow everyone’s mind, not because it’s long, but because it’s straight. After eight holes of doglegs, that long stark, straight tunnel will be unnerving.

The 633-yard par-5 12th hole — yes, I’ve stopped hyperbolizing — will certainly be hit by one or two big hitters in two, but that choked fairway will be the end for many badly played second shots.

Oh, before I forget, I should probably mention that I haven’t done any drugs since the making of Caddyshack in 1979, so any references like “Do you do drugs, Danny?” are not only outdated, but also demonstrate a need to update your film references for the 21st century.

On the other hand, think of the bonus of having your caddie razzed with shouts and hisses of Noonan! while you putt (not by the fans, mind you, because there won’t be any — I mean by the players). Who could ask for more?

Sorry, back to the course … again.

As for the last hole, I have two words for you: Phil Mickelson. I am still haunted by what happened at the Open in 2006.

Any questions? You can reach me here, or at the Winged Foot caddie shack, where the ghost of Gene Hayden is still roaming around, screaming in his patented gravelly voice, “Michael O’Keefe, get J.J. Gagliardi’s bag and head to 1st East.” (Winged Foot has two courses, West and East.) Or drop me an email at hiredannynoonan@gmail.com. I’m not kidding.

A bit more about myself: I am a good person, and father to a 7-year-old boy, Aidan. I can punctuate sentences with the clarity of an English major, and I exercise daily. I may be 65, but I act like I’m 30. Or, at least, I train like I’m 30, an age at which I was still acting out in demonstrably destructive ways.

Meanwhile, I am still pretty busy as an actor. Most recently, I have been starring opposite Kevin Bacon in his Showtime series City on a Hill. I also have a new horror film on Netflix coming out, Things Heard and Seen.

There’s one more reason to hire me. I want Aidan to see me being of service to someone else. In America, we are way too concerned with being number one, winning the trophy, getting the girl, making it big! I want my son to know that sometimes it’s better to be in the supporting role, the one who helps someone else realize his or her dream.

Anyway, I have to go now and keep prepping in case someone decides to take a chance on me.

Seriously, what does my future boss have to lose? He’ll most likely miss the cut anyway, but, at least, it would be a week that he’d never forget.

U.S. Open participants: Want Noonan on your bag? E-mail him at hiredannynoonan@gmail.com.

Stock up in our Pro Shop!