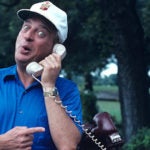 The original ending to 'Caddyshack' featured strange scenes with Danny Noonan and Ty Webb at an airport. They never made the final cut.

This week marks the 40th birthday of one of the most iconic movies of all time: Caddyshack.

The film remains beloved by golfers even 40 years on, but it wasn’t destined that way from the start. On the contrary: The film, at the time, looked like it would be a major flop, marred by wild partying on set, in-fighting between actors, and a disjointed plot which featured huge amounts of improvisation.

As Chris Nashawaty recounts in his book Caddyshack: The Making of a Hollywood Cinderella Story, the film was originally intended to be a story of the caddies themselves. Danny Noonan was the main character, and the film focuses on him and his peers as they come of age and prepare to go to college. Everybody else was supposed to be a minor character — Bill Murray’s original role wasn’t even a speaking part.

That’s partly why the movie itself opens with a scene about Noonan and his family. But you may notice the film doesn’t end the same way. That’s because the explosion scene and famous last line from Rodney Dangerfield which ends the movie was never intended to be the closing scene. That was supposed to be the third-to-last scene.

Here’s how the movie was originally supposed to end, as Nashawaty writes:

“In the early drafts of the script, the film ends right after the explosion with Danny at the airport, supposedly headed off to college but distracted at the last minute by a babe headed to Jamaica who makes him change his plans. He follows his bliss instead of the responsible path he’s supposed to take. Life lessons are learned, etc. There was also supposed to be a brief Casablanca-like scene in which Ty and Lacey walk off into the sunset with Chase saying: “Should we get together? We couldn’t respect each other less.”

But as you know that never came to be. Why?

The original cut of the film was a messy four hours, so the directors needed to make some big changes. They ultimately saved the film by recognizing the comedic talent they had in Rodney Dangerfield, Bill Murray, Chevy Chase, and Ted Knight. They reshaped what was supposed to be a movie about caddies around four characters that weren’t caddies, cut scenes like ones above, and in doing so, transformed transformed a nearly-forgettable flop into a hilarious screwball comedy.

Perhaps fittingly, the eventual last line — Dangerfield’s “Hey everybody, we’re all going to get laid” — was another improvised line that they decided to keep on, as writer Harold Ramis told Nashawty:

“Because it made absolutely no sense, which at that point was pretty much par for the course.”