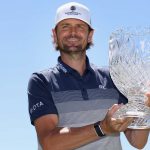 With the calendars flipping to July, it is just about time for the premier celebrity golf event of the summer — the American Century Championship. And this year, fans can be more engaged than ever as they watch their favorite celebrities and athletes compete on the links.

This year, American Century is offering their first-ever fantasy golf contest as fans pick a team of five players and compete for a chance to win a trip to the 2022 American Century Championship, plus $10,000 to a charity of their choice.

“The Championship is already a fan favorite as a family-friendly tourist attraction and made-for-television sporting event,” said American Century President and CEO Jonathan Thomas. “New for this year’s tournament, we are thrilled to bring fans even deeper into the American Century Championship experience by playing to win with their own star-studded fantasy teams.”

The person with the highest-scoring team at the end of each tournament day will receive a trip to the 2022 American Century Championship, while the overall champion will receive an additional $10,000 to a charity of their choice.

“American Century Investments is proud to host this premiere celebrity golf tournament that is ‘must see’ television, all while raising millions of dollars for dozens of worthy causes and nonprofits,” Thomas said. “Doing good is at the heart of American Century, and we are always looking for new ways to invest in a better future.”

Fans will have an opportunity to choose from a pool of 80 athletes and celebrities to create a team. Entries must be submitted by midnight on July 8.