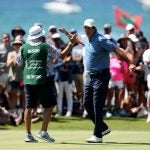 Vinny Del Negro on Sunday after his victory at the American Century Championship.

Vinny Del Negro carved out a 12-year NBA career, made the playoffs in seven of those years and scored just under double figures per game. As a coach, he guided four of his five teams to the playoffs, including the “Lob City” Los Angeles Clippers a decade ago. Golf and celebrity golf tournaments were what he did when he wasn’t feeding David Robinson, or designing pick and roll for Chris Paul, Blake Griffin and DeAndre Jordan.

But dig a little deeper, and you see that Del Negro is a 2 handicap, and you don’t flirt with the 60s just by putting on a collared shirt and smiling.

Dig even a little more deeper, and you learn, as quoted in a 2012 Los Angeles Times story, that his father “was a workaholic, running two bars and a [liquor] package store. My job was to make money.”

Which brings us to Sunday.

Vin Del Negro’s son birdied the 18th hole at the Edgewood Tahoe golf course to move into a two-man playoff at the celebrity golf American Century Championship. Vin’s son, on the first hole of the playoff, hit the par-5 18th nearly in two, nervously left a 40-foot putt 10 feet short, then calmly cleaned it up. Vin’s son won, the first basketball player to do so in the 32-year history of the event.

NBC’s Jimmy Roberts would stop him. This is their exchange:

“Emotional Vinny Del Negro here,” Roberts said. “You came here first when you were 35 years old. You’re 54 now. Is this something that you perhaps thought maybe this may or may not ever happen?”

“I lost my father this Wednesday.”

“I wanted to play well for him. I thought of him the whole time, every fairway, every shot, what he would tell me: toughen up, hit the shot, you’re either good enough or not — just hit it. And I stuck to my game plan. My caddie, Dirk, who’s been with me for years, was fantastic. And this is for my dad. You know … thought of him every shot. He was such a — I wouldn’t be here without him, you know, so … winning this tournament means so much to me and performing well for him, can’t tell you what it means. It means the world to me.

“I was going to ask where this ranks for you, but I think I have an idea,” Roberts said. “If you could say something to your father right now — maybe it’s not a fair question — but tell me what would you say to him.”

“I did it for you. You’re my rock. I love you, I miss you, and I won this for you. And man, it’s tough, it’s just so much stuff going through my head. Every shot was, like, for him, like every walk was for him, every putt was for him because I wouldn’t be playing in this thing him pushing me all those years to play and tough it out and whatever I was doing — playing, coaching, it didn’t matter. So this is for my dad, my wife, Lynn. Everybody, I love you, and I can’t wait to celebrate with them.”

Vin’s son then took three steps, shouted and would wipe away tears with his left hand from his right eye and then his left.