Jon Rahm after his closing birdie at the U.S. Open on Sunday.

LA JOLLA, Calif. — There was a moment, early on U.S. Open Sunday, when the golf world stood at a sort of moral attention, the preferred USGA stance. All was orderly. All was right.

Rory McIlroy and Russell Henley, in the day’s penultimate twosome, were marching down the first fairway, and the gents in the final twosome, Mackenzie Hughes and Louis Oosthuizen, were on the first tee. Behind them, Gary Woodland, a former U.S. Open winner, and Edoardo Molinari, a former U.S. Amateur winner, walked on by, coming off 18, their workday done early, their sparkle a couple steps behind them.

Standing sentry on the back of the first tee were three mainstays of U.S. Open golf: Mike Davis, at the last event of his 31-year USGA career; Bob Ford, the ultimate USGA head pro (Oakmont, Seminole), coming out of retirement to work as the starter; and Roger Maltbie of NBC, who played in eight Opens and covered a thousand more.

The spectators were silent. The Pacific, in the distance, heaved like a sleeping baby. King Louis smashed an opening tee shot, made a U-turn, shook Davis’s hand, wished him a fond farewell, and headed out. All of the contenders were out. They were all off and running.

And that was it for order.

For the next five hours, chaos visited this slice of golfing paradise. We’re not even talking about the guy who slipped under the ropes with club and ball, attempting to play a hole on this public links, the South Course at Torrey Pines.

Bryson DeChambeau almost made a 1 (on the par-3 8th), tapped in for a 2, raced to the top of the board with a front-nine 33, then did a back-nine stall-out like a drone out of juice. History will have to decide whether he bladed or shanked his fourth shot, from gnarly greenside rough, on the par-4 17th, where he made an 8. Well, others have made 8 there, too.

And how about BBB? (Big, bad Brooks.) After characteristically macho birdies on 13, a monster par-5, and 15, a monster par-4, Koepka was four under for the tournament. (Spare him, and his touring bros, the whole championship lecture. Not their thing.) Koepka was in perfect position to post five under early and let the others sweat. Instead, he made two bogeys on his way to 18, on his way to Palookaville, and there ain’t nothing for him there except private-jet travel to Royal St. George’s and glory’s last shot.

As for McIlory, his room-service chicken-sandwich magic ran its course. On Sunday afternoons at U.S. Opens, veteran players (and observers) often get a number in their head about the winning score that is never far off. This Sunday, for all the world, felt like six (under) would win and five would play off. (That’s the vernacular.) Rory plays to a number. So does Tiger. (How you, Tiger?) So did Jack Nicklaus and Mickey Wright and various others. McIlroy knew, making the turn at four under, he was in good shape, with two back-nine par-5s he could reach in two. But he needed 39, three over, coming in. Not what the doctor ordered. Not even close.

And then came Rahm.

Senor Jon Rahm, of Spain, of greater Phoenix, of the world.

Under normal circumstances, he’s hard to miss, what with his thighs on loan from the Sequoia National Forest, his five-day stubble, his Jimmy Neutron head. His temper, his grace. Witness how he handled his sudden departure from his last tournament, the Memorial, where he was leading by six shots after three rounds but could not play on Sunday because he had tested positive for Covid-19. He blamed no one but himself.

And then there was the Sunday night at the 2020 Memorial, when he was told on live TV that he was receiving a penalty for unwittingly causing his ball to move in the greenside rough on 16. He handled that with grace, too. Of course, it helped that he won the tournament even with the two extra shots. He plays hard courses well. The best do. Torrey Pines was a tough course this week. A difficult, fair demanding beautiful course.

Rahm was in the fourth-to-last twosome. He was three shots behind the leaders through three rounds. Who could have expected him to win? Who was focused on Rahm? Through 54 holes, there were three guys at five under. Two guys at three under. Three bombers — Scottie Scheffler, plus Rahm and his playing partner, Matthew Wolff — at two under. Another five guys at one under. The USGA odds-making computer did the gambling math for us. (That’s just weird. That doesn’t sound like the USGA that Mother grew up on.) Rahm’s chances were officially listed as eh.

Spanish golf, to reduce Spanish golf to a sporting stereotype, does not lend itself to U.S. Open golf. 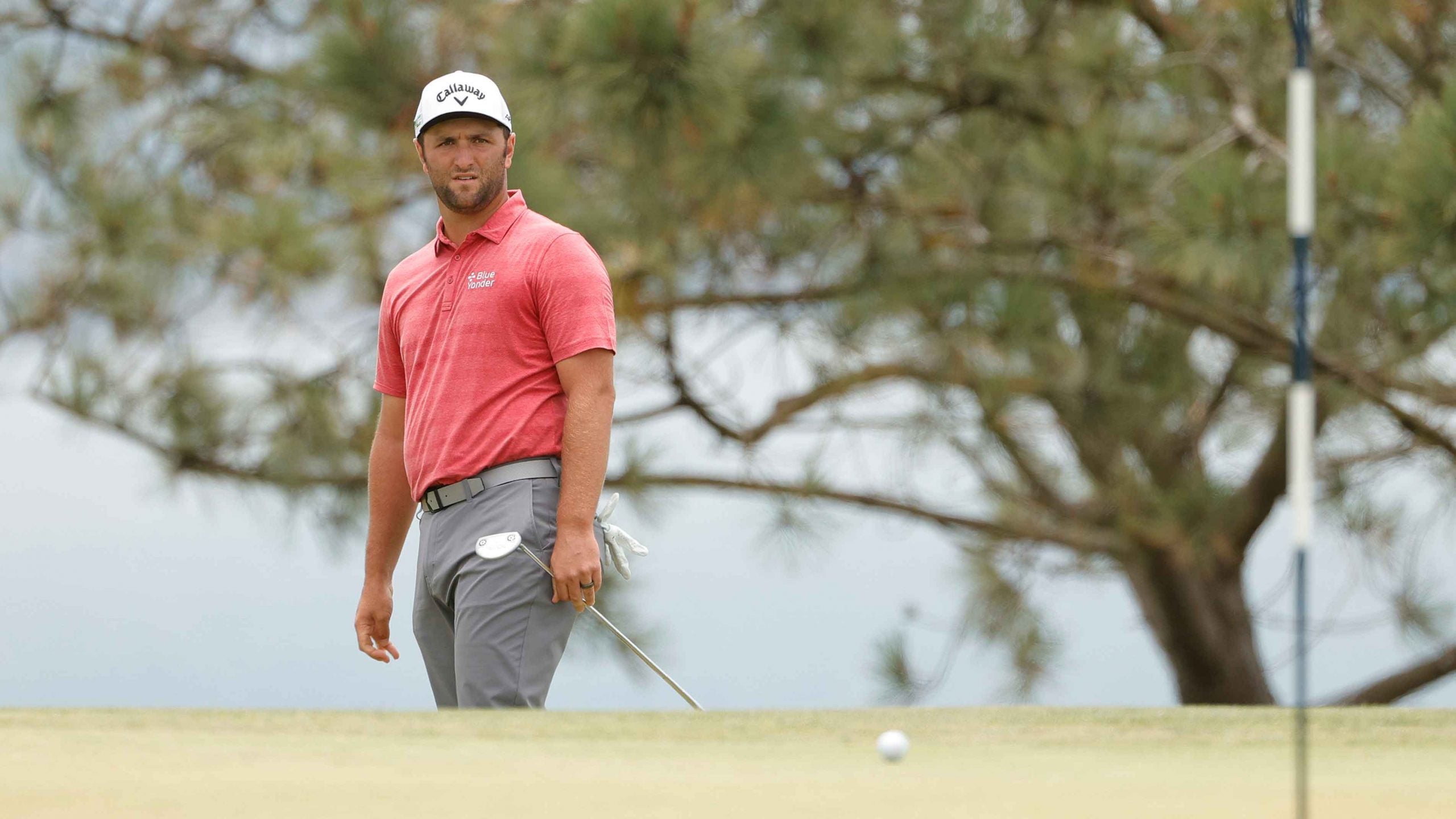 Rahm cried after he beat Tiger Woods on Sunday at the 2018 Ryder Cup in Paris. Not from the joy of victory, but out of appreciation. That his life and his talent and his work had taken him to a place where he could face his childhood hero on equal footing and then some. That’s Rahm. He’ll tell you that it was a privilege to play the first two rounds of the 2019 Masters with its eventual winner, Tiger his own self. That’s Rahm, the golfer and man.

Rahm is a new father. Sunday was his first Father’s Day. His wife’s maiden name is Kelley Cahill. Not a notably Spanish name. But she’s sporty, as is the Rahm clan and so many others from the Basque, as he is. Mrs. Rahm can throw a football 50 yards. She threw the javelin at Arizona State, where they met.

Father’s Day (we all know) is a high-corn American holiday, but have you ever seen Rahm at an airport or a restaurant? He does family like nobody’s business, shuffling along in massive flip-flops, wearing a T-shirt he might have slept in, his arm around somebody not making him any money, traveling with a half-dozen or more. It’s a joy to see. They all speak fast.

Rahm’s college coach at ASU was Tim Mickelson, Phil’s brother. Later, Tim became Rahm’s manager. The Mickelson brothers have Torrey Pines in their blood. What they know about the South Course, Rahm knows. Rahm has had Spaghetti alla Mary (Mary Mickelson, mother of Phil and Tim) more than once. Rahm won at Torrey Pines in 2017, at the Farmers Insurance Open. Through three rounds he was three shots back. (Sounds familiar, right?) He closed with two big putts, holing a 60-footer on the last. His win that week was his first on the PGA Tour. He was young. Even now, he’s only 26.

Rahm’s backswing is as short and fast and Phil Mickelson’s is long and rhythmic. Julius Boros won two U.S. Opens with long and rhythmic. Nicklaus, four, L&R. Hogan, four, the same. Payne Stewart, two, ditto. Coming into this U.S. Open, the last short-and-fast swinger to win a U.S. Open was Hubert Green, in 1977.

Then Rahm made a birdie on 17, to get to five under, and his odds went from eh to good chance to get in a playoff. Then, on the par-5 18th: up-and-in from a greenside bunker, the birdie putt from 18 feet. Holy smokes. He was at six under and his odds of winning went to very damn high. Then King Louis did on 17 what he did not do at the 1st: he drove it out of play, took a penalty shot, made a bogey and Rahm won from the house. From the driving range. From Spain. From Mary Mickelson’s. From the ASU campus. From the memory bank of all the things he saw Tiger do over the years. There have been two U.S. Opens at Torrey Pines. Tiger won the first one, and Rahm the second.

He hugged his wife.

He hugged his caddie.

He hugged his baby.

He hugged his trophy.

He tucked in his shirt. It’s always coming loose. It really doesn’t matter, in 2021. But, you know, the USGA.

He was awakened by crows Sunday morning. Damn crows. He never got back to sleep. When your first-born is 10 weeks old, you don’t go back to sleep, anyway. Ditto for when you’re trying to become the first Spaniard to win the U.S. Open.

“I’m a feel player,” he said in victory. He said a lot of things, about Phil, about Tiger, about his wife, their baby, this game, his game, Spanish golf, about life and sudden death. Real life sudden death, a reporter friend from home, from Spain. A lot of players like to say they are feel players, but Rahm really is. This U.S. Open was chaotic. For a true feel player, that’s nothing but good.