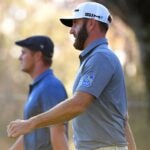 Dustin Johnson said he was tempted by adding distance but concluded that the math didn't ultimately make sense.

“Probably like October of last year, I was doing a little bit of speed training, started getting sucked into that stuff,” McIlroy said after missing the cut by 10 shots at TPC Sawgrass. “I added some speed and am hitting the ball longer, but what that did to my swing as a whole probably wasn’t a good thing, so I’m sort of fighting to get back out of that. That’s what I’m frustrated with.”

“I messed around a little bit back in October, and yeah, I mean, if I want to, I could hit it further. I have a driver that I could definitely hit a lot further than the one I’m playing. But to me, the little bit of extra distance that came with it, obviously the harder you swing, the bigger your misses are. For me, it just didn’t help.”

It was tough to argue with that approach at Augusta National, where DeChambeau entered the week with plans to overpower the course only to finish T34. Johnson, on the other hand, hardly missed a tee shot all weekend and shot 20 under to finish five shots clear of the field. Nuff said.

“When I’m at my best and I can’t beat someone, then I’ll try and change something,” Johnson said. “But as of right now, I feel like if I play my best golf, I feel like I can beat whoever I’m playing against.”

Johnson’s green jacket would agree, as would his eye-popping results page and his stranglehold on the world ranking. That’s not to say he’s anti-distance; in the same Tuesday interview he reiterated his admiration for DeChambeau’s work and acknowledged that hitting it far and straight is a tremendous advantage. Instead, the remarks were another reminder just how secure Johnson is in his own game.

“Well, you’ve got to put in the work, and he’s obviously putting in the work,” Johnson said matter-of-factly. “He wants to hit it further. It’s what works for him.”

For further evidence of Johnson’s self-belief, allow me to admit the testimony of Sunday’s Players winner, Justin Thomas, who said he got inspiration from…you guessed it:

“I think DJ is a great example of someone I’ve thought about a lot,” Thomas said. Last summer, the two played together in the midst of a Johnson mini-slump, where he finished last place one week and WD’d the next.

“He was going through some tough stuff and tough times, but we all know DJ mentally is really, really strong, and he stays very even-keel and forgets stuff easily, and I think that’s something that I may have used a little bit,” Thomas said.

On Tuesday, Johnson was asked if there’s anybody he looks to for inspiration. From whom does golf’s Zen Master learn his mindset? The question yielded a pause so long I wondered if Johnson’s line had gone dead.

“I don’t know,” he said eventually. “No, not really that I’ve thought about. I feel like what I’m doing has been working pretty well, so I’m going to stick with it until it’s not.” Then he apologized. “I didn’t really answer your question very well.”

That’s where he’s wrong: Johnson answered honestly and tellingly. It was a final reminder: He’s 1 of 1.

Oh, and if you check the PGA Tour’s distance rankings, you don’t have to scroll too far to find Johnson’s name. The world’s best golfer is still its sixth-longest driver. That seems to be working for him just fine.