Rory McIlroy says he got ‘sucked in’ by speed race, chasing Bryson 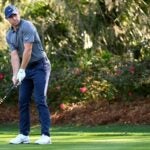 Rory McIlroy led this week’s Players Championship in driving distance. He also finished T142 and missed the cut by 10. That duality doesn’t tell the whole story of his week, nor of the current state of his golf game — but it’s not a bad place to start.

McIlroy’s tournament hopes got off to a poor start on his very first swing of the week, when he hooked driver off No. 10 at TPC Sawgrass en route to an opening double bogey. His hopes of a title defense vanished with another pulled driver (and a pulled iron to follow) at No. 18, where he made quadruple-bogey 8. McIlroy opened with 79 and followed that with 75. The cut won’t become official until Saturday, but McIlroy will miss by 10 shots. That was a wide enough margin to cause the world No. 11 to reflect on how he’s gotten to this point.

Our Michael Bamberger wrote earlier today about the obvious balance that McIlroy has found off the course. That’s all true. But in terms of his actual golf swing, McIlroy has used one word as much as any other: “frustrated.” He described himself that way after missing the cut at the Genesis, and he was frustrated again despite contending at Concession and Bay Hill. He’s been grinding on the driving range before, during and after tournaments, and he’s been frustrated there, too. After his Friday round he was asked what, exactly, he was most frustrated with. His answer was telling.

“Probably the swing issues and where it all stems from,” McIlroy said. “Probably like October of last year, I was doing a little bit of speed training, started getting sucked into that stuff, my swing got flat, long and too rotational. Obviously I added some speed and am hitting the ball longer, but what that did to my swing as a whole probably wasn’t a good thing, so I’m sort of fighting to get back out of that. That’s what I’m frustrated with.”

That’s a startling admission for any professional athlete. How often do we hear admissions of failure mid-failure? But McIlroy is an unusual figure on Tour. He’s unusual in his length off the tee, which at 319.8 yards is second to only Bryson DeChambeau at 323.5. But he’s also unusual in his self-reflection, which continues to endear.

As he gazed into the rearview mirror, McIlroy pinpointed DeChambeau’s Winged Foot victory as the moment everything changed.

“I look back at Winged Foot and look at my swing there, and I would be pretty happy with that again,” he said. But in his mini offseason he started chasing speed. “I started to try to hit the ball a bit harder, hit a lot of drivers, get a bit more speed and I felt like that was sort of the infancy of where there swing problems have come from.”

McIlroy was obviously already plenty long. Why the obsession with getting longer?

“I’d be lying if I said it wasn’t anything to do with what Bryson did at the U.S. Open,” he said. “I think a lot of people saw that and were like, ‘Whoa, if this is the way they’re going to set golf courses up in the future, it helps. It really helps.'”

If imitation is the sincerest form of flattery, then DeChambeau would be honored to hear the effect he’s had on one of the game’s very best golfers.

“The one thing that people don’t appreciate is how good Bryson is out of the rough,” McIlroy added. “Not only because of how upright he is but because his short irons are longer than standard, so he can get a little more speed through the rough than us, than other guys. And I thought being able to get some more speed is a good thing, and I maybe just — to the detriment a little bit of my swing, I got there, but I just need to maybe rein it back in a little bit.”

McIlroy described his eagerness to get home; he’s played seven tournaments in eight weeks, and frustrated golf is exhausting. The Masters is on the horizon, but McIlroy knows he needs a hard reset between now and then.

“First and foremost I have to be able to hit the shots and get the ball starting on my line and control the flight and control the spin,” he said. Pros have a way of making the impossible sound elementary. “At the minute I’m struggling to do that, and if you can’t do that going to Augusta, you’ve got no chance.”

It’s worth noting that McIlroy wasn’t the only golfer to use the word “frustrating” after his round. DeChambeau did too, describing his emotions after he started his round with a pull-hook off the 10th tee — the very same way McIlroy’s Thursday began. But DeChambeau’s game is in a better place at the moment, and while McIlroy’s big left miss was a sign of things to come, DeChambeau managed his way around with much more success.

After his round, DeChambeau headed to the driving range, as he always does.

“I’m a perfectionist, and I’ll continue to be so until the day I die and until the day I stop playing this game. That’s just the way I am,” he said. On good putting days, he says, he’ll hit one putt on the practice green, and if it rolls true he’ll call it good for the night. With his full swings, the process is never so simple.

Being Bryson DeChambeau is a pretty effective strategy on the PGA Tour at the moment. But McIlroy has made an awfully solid living being himself, and it sounds like that’s the approach he’ll embrace going forward.

We’ll forgive him if he sounded an awful lot like DeChambeau as he wrapped up his remarks to reporters to hit balls into the setting sun.

“Yeah, I want to get on the range right away to get through this,” he said. “I’m pretty determined to get back to where I know I can be.”