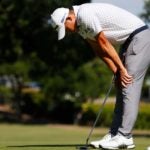 Collin Morikawa's impressive streak of made cuts came to a close at the Travelers Championship.

At long last, the streak is over for Collin Morikawa. After a remarkable run of 22 consecutive made cuts to start his pro career, Morikawa is finally trunk slamming on a Friday afternoon.

Morikawa’s consecutive cuts streak comes up just short of the record 25 consecutive cuts Tiger Woods made to open his professional career from 1996 to 1997 — a number the 23-year-old had set his sights on over the past several weeks.

“Obviously the goal is to reach Tiger, if not beat him,” Morikawa told the Golf Channel two weeks ago at the Charles Schwab Challenge.

But after a lackluster 72-71 start at the Travelers Championship, Morikawa will have to settle just behind Woods in the record books. His 3-over performance puts him well outside the projected cut line at TPC River Highlands with the afternoon wave yet to play.

“It was bound to happen at some point,” Morikawa said. “Who knows when that was going to be. But now I guess we’re going to stop talking about it and I can go and just go on to next week.”

Morikawa’s sizzling start to his career has come with plenty of highlights, including a win during his rookie season at the Barracuda Championship last summer. His run also included seven top 10s, a berth in last season’s FedEx Cup Playoffs and a runner-up finish at the Charles Schwab Challenge two weeks ago.

While it’s impressive for Morikawa to come close to any record held by Woods, the context of the 15-time major champion’s streak makes the gap look even larger. Of Woods 25 consecutive made cuts to begin his career, six of them were victories, including his runaway at the 1997 Masters. Not long after that, Woods started a streak even more awe-inspiring — 142 consecutive made cuts. Morikawa has his work cut out for him if he wants to nab that record.