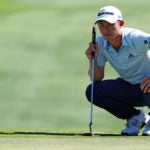 Collin Morikawa inspects a putt during the 2020 Charles Schwab Challenge.

CROMWELL, Conn. — When Steph Curry catches a ball on the three-point line with a defender closing in, or a batter sees a fastball hurtling towards them, they don’t have time to methodically consider what’s happening. They react, almost instantaneously, and nothing more.

Golf, obviously, is different. There’s not really a shot clock, which means there’s a slow build up before every shot. Every movement is well-considered — almost too well-considered — which brings us to Collin Morikawa’s handy piece of advice that he says helped his putting.

Morikawa established himself as one of golf’s brightest up-and-comers last year, but he’s been on a particularly good streak recently. He finished T9 at Bay Hill, the last event before the impromptu offseason, and lost in a playoff in his first event back.

His putting, he says, has been the engine of his good play, and it’s because of a new mindset, inspired by the great athletes across other sports.

Morikawa’s key: REACT to the target

Morikawa was a little sheepish with revealing the exact details — “I word this properly just so I’m not sharing my secret,” he says — but it’s about reacting more to the target.

“It was just to be more of an athlete, be an athlete that reacts to your target. You look at all other sports, basketball, you think basketball, they’re always looking at their target. I thought of Jordan Spieth when I was putting, when he used to look at his target, he was reacting. That’s all he does. He takes a couple quick looks, if you look at his pre-shot routine, a couple quick looks, doesn’t stand over it too long, but he’s committed and he just reacts to the target. And I think before I was so focused on speed or I was so focused on trying to hit this great putt that I just wasn’t reacting to what I was doing. I react when I hit an iron shot, why can’t I do that when I’m over the putter? So I’m telling you, the stats — it’s a very small, small portion since Bay Hill. But I really believe that it’s slowly getting better, which I’m excited about.”

Well that all sounds great, Collin, but how do you react more when you putt? Like I said, he wasn’t overly forthcoming with the details, but watching him practice his putting on the ground at TPC River Highlands ahead of the Travelers Championship this week, I think I might have figured it out anyway.

Keep looking at the hole as you line up your ball

Morikawa uses the TaylorMade logo on his golf ball to line-up his putts. Usually, players line up the golf ball by reading the green, picking a line and moving their eyes back and forth down it as they go. But Morikawa doesn’t seem to do that. Instead, he keeps his eyes locked on the target as he crouches over the ball, and adjusts the line on his ball while continuing to look at the hole the entire time.

You can see him do it below; notice how his eyes are locked on the hole, but he continues to adjust the ball…

It’s hard to tell if this is indeed Morikawa’s secret, but at the very least, it’s something to try for yourself. See the hole, and react.