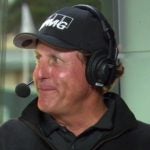 Phil Mickelson’s broadcast debut was (in typical Phil fashion) a swashbuckling, rib-rattling success. In his hour inside the CBS booth during the third round of the PGA Championship from TPC Harding Park, Mickelson was engaging, entertaining, informative, and unapologetically himself — and golf fans loved it.

But perhaps more impressive than his on-camera success is the rousing goodwill he received from the broadcast community for his debut (with the exception of Nick Faldo, who served as the butt to more than a few jokes).

A few weeks after Phil’s debut, you can count Brandel Chamblee and Paul Azinger among those impressed.

“I love Phil,” Azinger said. “I thought he was awesome in the booth. He could do that anytime he wants. He and Faldo went at it kind of like Faldo and I went at it. I think it’s nice to have a foil sometimes, and that’s kind of how that looked to me.”

Chamblee echoed Azinger’s sentiment, even going as far as to compare Lefty to another star player turned right-hand-man to Jim Nantz.

Back in 2017, Romo was hired by CBS Sports shortly after his retirement from the NFL to serve as the network’s lead football color analyst. Almost immediately, he became a broadcast sensation known for his proclivity for predicting plays before they happened.

In the spring of 2020, Romo signed a 10-year, $180 million dollar extension with the network. Romo’s deal is believed to be the highest-paying contract in sports broadcast history.

Phil, on the other hand, is busy winning Champions Tour events and marketing his “Coffee for Wellness.” For Chamblee, Mickelson and Romo share the rare intersection of entertainment and intuition.

“I listen to every word that’s said on air and check it and cross-check it, and I find myself pulling for the commentators as much as I do the players,” Chamblee said. “I want them to tell me something I don’t know. I want them to tell me something nobody else has thought of, and it’s hard to do that because the whole world is kicking and scratching for the same information and they all have the same information, and I thought Phil did that.”

And while Phil has no plans to retire to the booth anytime soon, the two NBC stars are anxious to see where his TV career goes.

“I thought it was hilarious; some of the most compelling golf I watched was watching Mickelson in the booth,” Azinger said. “I loved it. “