I had lunch with David Feherty. Here are 5 epic (and hilarious) stories he told 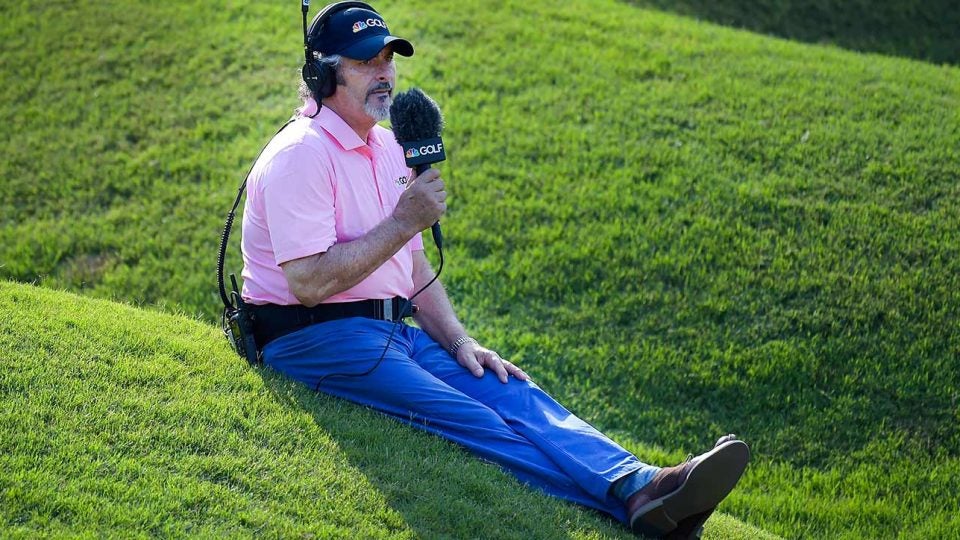 I was going through my phone the other day. You know the drill: scrolling through pictures, social media feeds and poking through underused apps.

It was during this practice I stumbled upon a few notes and a recording from a recent sit-down lunch with David Feherty. Feherty was in New York City in February to promote the 10th season of his Golf Channel show, Feherty, and I was one of a few reporters that sat with him at a corner table at a Mexican restaurant near Lincoln Center. I wrote this piece a few days later on the one guest Feherty would love to have on his show but has yet to secure, but as you might guess, that lunch was full of laughs, stories and above-average guacamole.

And just like good Mexican food, we aren’t about to let a good lunch with Feherty go to waste. Here are some of the best tales he told. Some maybe you’ve heard before, while others perhaps you haven’t. Enjoy.

After one tournament round during Feherty’s playing days — the event escapes him — he joined Payne Stewart to unwind and watch a basketball game on TV. But Stewart, who Feherty said was “always a practical joker,” swapped room keys with Feherty.

“Payne plays the next day, hits a groundhog in the ass in his way back in the courtesy car,” Feherty said. “Stops, gets out, he thinks, ‘Well, it’s a perfectly good dead groundhog, and I have Feherty’s room key.'”

Then the next day …

“I come back, having played in the afternoon, and clump, I put the clubs down by the desk in the room, and a f—— beaver jumps out underneath it! You know, it scared the s— out of me,” Feherty said. “You know, this thing is foaming at the mouth and s—. I end up standing on the desk, and I’ve torn 18 inches of sheet rock out of the ceiling with the chandelier cords. And it keels over, and I’m poking it with my sand wedge, you know, to make sure the damn thing is dead. It’s a steaming pile of Stewart. That’s what it is.”

Feherty had already planned to meet Stewart again that night but wasn’t going to act like anything happened. He knew that it would annoy Stewart if he didn’t say anything, as Stewart would have loved nothing more than to see Feherty fuming. So Feherty tried to keep his cool, but that didn’t last long.

A couple of weeks after the groundhog incident, the Tour was in Greensboro, N.C., and Feherty thought it was the perfect time for payback.

“I took his courtesy car, because there wasn’t much room in the parking lot, so you had to hang your keys up so the valet could move the cars around,” Feherty said. “I think his car key, it was number 69. I remember it like it was yesterday. I took ’em around to the side of the clubhouse and tossed them into the rose bushes beside the putting green. And I come around just in time to see him leaving in my courtesy car.”

Feherty spent 19 years covering the Masters, and for all of them he was stationed high above the action in a tower next to the 15th green. The 15th is one of the best vantage points on the course, as he could see balls being played into the crucial par-5 and irons hit into the par-3 16th.

Feherty said during this lunch, and on previous occasions, that the Masters “was difficult for me.” As someone who relies on their quick wit and colorful analysis, that wasn’t always in line with how buttoned-up Augusta National likes to run things. One day, for example, Feherty was sweating for a comment he made that lacked crucial context from the video feed.

Tiger Woods was teeing off on the 15th hole. No one had hit it near the second crosswalk in the fairway at that point, which is one-third of the way down the hill. The security guards figured it was out of reach, too, as they let patrons walk across as Woods was hitting. Feherty watched Woods tee off from the tower. “He hit it so damn hard,” Feherty remembers. “And I look out from behind the monitor, and the ball’s bouncing down the fairway toward the second crosswalk, and there was one lady that saw it, and she was wearing a long skirt and tennis shoes. She went ‘Uh-oh!’ (and jumped) like there was a little mouse running into the room, you know. And it ran through the crosswalk, and I said, ‘Oh, well, the ladies have to lift their skirts for that one.’ And I looked back at the monitor, and we’re still tight on Tiger’s face. So every women in the vicinity, you know, had exposed themselves to Tiger, as far as the bureau was concerned. It’s like, ‘Oh, s—. I thought we were going to be following the ball?!'”

Two 1s are better than 1 at the Masters

Another Masters moment came during the first round of the 1998 Masters, when Ignacio Garrido was running into all sorts of problems on the 15th. The broadcast, however, never cut away from Feherty and stayed with Garrido for every single shot, until he eventually made an 11. Feherty struggled to call the discouraging series of events.

An iconic divot takes over a lawn

Arnold Palmer played his last Masters in 2004, and he, like all legends, received quite the sendoff in his final round. Feherty recalls a story of a spotter on the 18th hole watching Palmer play the par-4 finisher.

“Arnold hits some kind of a wood for his second shot and took a little divot, but (the spotter) was standing there and he thought, ‘That’s Arnold Palmer’s last divot at Augusta; I think I’ll keep it,'” Feherty said. “The spotter took it back home and stamped it into a hole in his yard.

“It took over his lawn,” Feherty continued. “His backyard is Arnold Palmer’s last divot at Augusta.”