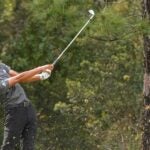 Collin Morikawa hits his tee shot on Sunday on the 6th hole at the Concession Golf Club.

The Concession Golf Club is not a course where it’s advisable to experiment with a new putting grip. Its greens move putts left and right, and up and down. Experienced putters had their woes this week at the World Golf Championships-Workday Championship, so how in the heck would a player two weeks into a grip adjustment fare?

Collin Morikawa won by three, and now he’s a four-time victor on the PGA Tour at just 24. Here are three things you need to know after Sunday’s final round in Bradenton, Fla.

Morikawa, who entered Sunday with a two-shot lead, dropped into a tie at the top after his bogey at the 2nd and Billy Horschel’s birdie on 3. But even the bogey wasn’t his putter’s fault — he needed two pitch shots right of the green, then rolled in a 6-footer.

On 18, Morikawa rolled in a 10-footer for par to finish with a three-under 69, an 18-under total and a three-stroke win over Horschel, Viktor Hovland and Brooks Koepka. Scottie Scheffler ended four shots back, and Rory McIlroy, Webb Simpson and Louis Oosthuizen finished six behind.

“It shows that I can come out here and compete,” Morikawa said of his win over a field that included 47 of the world’s top 50 players. “But what a week. I mean, I was working on so much the past couple weeks. … My game felt so good, but I’m just so excited right now.”

Horschel, after his birdie on 3, played one-under from there and finished with a two-under 70. Bogeys on 10 and 15 burned him. On 10, Horschel couldn’t get up and down after hitting his approach, from a fairway bunker, over the green. On 15, he hit his approach short, left and just into some bushes and could hit his ball only away from the green to get out.

Hovland birdied 12 and 13 to move within one shot of Morikawa, his birdie on 13 coming after a spectacular chip from the bushes right of the green. But he bogeyed 14 and 16 to fall back and shot a five-under 67. His closing hole on Friday was costly — he quadruple-bogeyed the 9th.

Koepka moved to within three after birdies on 13 and 15, but three bogeys before that doomed him and he shot a two-under 70. Scheffler was within two shots of the lead at one point, but double-bogeyed the 16th after hitting his tee shot into the water.