The Match best of: Charles Barkley flirts with Tom Brady, and 500-yard drives 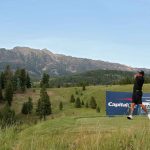 Phil Mickelson hits a tee shot on Tuesday at Moonlight Basin during the fourth edition of the Match.

One player arrived in a helicopter. A former president said he may have inspired a major championship. One quarterback drove a 392-yard green. The other one, a few holes later, drove it 438 yards.

Bryson DeChambeau and Aaron Rodgers defeated Phil Mickelson and Tom Brady 3 and 2 on Tuesday at the Reserve at Moonlight Basin in the fourth edition of the Match. But the match ending on the 16th hole isn’t all that happened. An NBA hall of famer flirting with a seven-time Super Bowl champion suggests otherwise. This event is meant to be high on entertainment, and there were many highly entertaining moments.

Below are the nine best:

Trash-talk coaching and a Koepka mention

About a half-hour in, Rodgers, more famously known as the quarterback of the Green Bay Packers (for now; more on that later), revealed his biggest contribution to the pairing: Rodgers can talk a good golf game. How good? He trash-talked his own partner.

“Now, I will say, I love Bryson, but he’s not an experienced trash-talker so my addition to the squad has been trying to get him to loosen up on the deliverance of the trash talk because you know he doesn’t quite understand maybe comedic timing at this point,” Rodgers said during the pre-round portion of the TNT broadcast.

Which, conveniently, followed this:

DeChambeau actually is involved in a verbal sparring. He and Brooks Koepka, through abs, red ants and an eye roll, have been going at each other for over two years. But if it got physical? Ahead of the match, DeChambeau posted to Instagram a video of him arriving to Moonlight Basin in a helicopter, then throwing a few punches while the Rocky theme played.

“Hey, I told you, when I got a chance to meet him, it was pretty cool,” said Match analyst, Match veteran and NBA hall of famer Charles Barkley as the video played on the broadcast. “I said that dude’s put together. Brooks Koepka better be careful walking up on that dude.”

A couple holes into the Match, former President Barack Obama appeared via video, and he was asked by analyst Larry Fitzgerald, also a wide receiver with the Arizona Cardinals, whether he would ever consider playing in a future Match.

“Look, here’s the thing: If I took five shots to get out of the sand, that becomes a meme,” Obama said. “So I’m not sure I have the courage to get out there like Chuck did. But I have to tell you: Chuck, his true competitive spirit came out last year. So it could be that maybe if Chuck does it one more time and survives that, maybe I’ll have a little bit more gumption to get out there and try it myself.”

To which Barkley replied:

“Hey, I tell you what, I’m going to make an executive decision. If you want to be my partner in one of these Matches, I don’t care what Turner says, you can be my partner.”

By all accounts, the 44th president can play. And he revealed that he did with Mickelson — two weeks before he went to Kiawah Island at the end of May.

“You know, I think it’s fair to say that it’s fortunate that I do not make a living playing golf,” Obama said. “But I’ve had a chance to play with Larry, and I brought him good luck — he had a hole in one when we played. Then I played with Phil, and about two weeks later, he won the latest major. So I think I’m generally a good-luck charm for other golfers, not necessarily myself.”

Obama stayed on the broadcast as the foursome teed off on the 392-yard, par-4 3rd. But DeChambeau wasn’t hitting driver in the 7,500-foot, thinner air elevation (more on that later).

“So we got a 392-yard hole, and Bryson’s scaling back to some sort of fairway wood,” analyst Trevor Immelman said on the broadcast.

“Yeah, I thought he would have been going for the green on this one,” Obama said.

“I think he is, Mr. President,” Immelman said.

DeChambeau would hit it to within about 8 feet.

DeChambeau would nearly be matched — by Brady, though with a driver. The longtime New England Patriots quarterback and current Tampa Bay Buccaneers QB hit to within about 10 feet, and he and Mickelson would win the hole.

“I’ve had some good games with him and the administration so it’s nice to hit a good one when he’s watching always,” Brady said when told Obama was on the broadcast while he tee off.

Bryson hears it from Phil — a lot

Mickelson was at his Phil-est throughout, but maybe no more so than on the 566-yard par-5 4th.

First, there was the tee shot. Mickelson piped one down the fairway with a 317-yard carry. He then turned to the PGA Tour’s longest hitter.

“Get you some of that there, Bryson,” Mickelson said.

DeChambeau would snap-hook it left.

“That’s what happens, though, when you keep it up with me,” Mickelson said.

“I think that’s a little intimidation in there, Phil,” Brady said.

“On national TV, when a 51-year-old outdrives you, that can’t happen,” Mickelson said. “You have to get after that. And then you hit shots like that.”

Then came the search. First for the golf balls. Then for a club. Rodgers had also hit his tee shot left, and after a few minutes, they’d eventually find just Rodgers’ ball, which was up against the side of a cart path. DeChambeau, after talking with an official, then mulled over whether to punch out with an iron or a hybrid.

Meanwhile, Mickelson and Brady would sit in the fairway in their carts, watch and wait.

“They had 15 seconds to find it for the last minute and a half, I don’t know,” Mickelson told Brady.

“Phil is having a great time over there with the needle,” Anderson said.

Where a 300-yard drive is very short

The par-5 8th is 777 yards. But, as mentioned, the air is thin in Big Sky, Montana. And there’s a 280-foot drop from tee to green on the hole — “almost the size of a football field downhill,” Immelman said. And included in that is a downslope just past a fairway bunker about 390 yards out.

All of which could, theoretically, create a 500-yard drive. The course even drew a white line across the fairway marking where a ball would need to cross in order to do so.

Mickelson hit first, hit it well, but it landed in the bunker. Then DeChambeau hit.

“That is amazing,” Mickelson said after DeChambeau swung. “Good heavens. Is that legal? Seriously.”

But it trickled into the rough — only 490 yards away.

DeChambeau would even take a mulligan to try to hit five hundy — only to snap-hook it. From 100 yards up, and Rodgers would hit his drive 438 yards, and Brady 300.

Where you playing this season, Aaron?

Mickelson and DeChambeau, after the Match, will play next week at the Open Championship. Brady will play for the Buccaneers, whom he helped lead to a Super Bowl title last year. But what about Rodgers? The longtime QB is involved in a lengthy dispute with the Packers, the only team he’s played for across his 16 seasons.

A few times during the broadcast, a bear was shown at Moonlight Basin, which led to this exchange:

“Aaron Rodgers, I see a bear out there,” Anderson said. “It leads me to a question — October 17, Packers-Bears, any idea who’s going to be there. Anybody going to be quarterbacking in the No. 12 jersey?”

“How about September 12 then. Will you go for that one?” Anderson said.

“What’s that one?” Rodgers asked, tongue in cheek.

“That would be the opener against the Saints,” Anderson said.

“Charles, I’ll tell you this week in Tahoe and you can leak it,” Rodgers said, referring to the American Century Championship, the celebrity golf tournament that both Rodgers and Barkley are playing in.

Seconds after the Rodgers Packers discussion, Brady hit the second shot on the 447-yard par-4 11th. It dropped about 30 feet short of the pin. Then TNT dropped the sound.

When it came back, Rodgers was heard saying: “Do you have a delay on that, for the language?” A few of the announcers muffled their laughter.

On a replay, Brady took the iron over his head and slammed it forward into the ground. A little bit of lip reading will tell you he screamed the word that rhymes with fit.

‘I’m blushing, Chuck. Only my wife can talk to me like that.’

Last November, Barkley and Mickelson teamed up to defeat the team of Peyton Manning and Steph Curry in the third Match, and throughout Tuesday’s version, Barkley lamented that he wasn’t picked to defend his title. He eventually understood why.

“Well, you know Tom, I’m surprised you picked him over me because what has he done legally to get picked over me?” Barkley said.

“He’s so pretty, though,” Mickelson said. “He’s so handsome.”

“Hey, don’t make the mistake I did one time — I looked him in the eyes and I was mesmerized,” Barkley said. “When I talk to Tom, I never look in his eyes anymore.”

Said Brady: “I’m blushing, Chuck. Only my wife can talk to me like that.”

A quarterback wins it

Last year, on the first hole during the second edition of the Match, Brady snap-hooked his tee shot. And Manning hit his out of bounds left. A few holes later, Brady would hole-out from the fairway — only to rip the backside of his pants down the middle. For stretches, they were, well, quarterbacks.

This year, Rodgers holed the match-winner, a 10-foot putt on the par-3 16th. Before that, in the modified alternate shot format, each quarterback had drives that were counted. (Including Brady’s 392-yard poke mentioned earlier.) And each QB rolled in putts to win or halve holes, including Rodgers on holes 2, 10, 11, 12, 14 and finally 16.

“That was insane today,” DeChambeau said to Rodgers as they walked off the final hole.