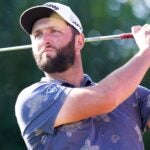 World No. 1 Jon Rahm is among the stars in the field this week in Hawaii.

The 2022 Sentry Tournament of Champions, the first official PGA Tour event of the new year, begins Thursday, December 6, in Hawaii. You can find full Round 1 tee times for the tournament at the bottom of this post.

Featured pairing for Tournament of Champions Round 1

Jon Rahm only played in one event during the fall run of the new PGA Tour season, resulting in a missed cut at the Fortinet Championship in September. But with the new year upon us, the World No. 1 is ready to get back to business at the Tournament of Champions.

Other than that MC at the Fortinet, Rahm hasn’t finished outside the top 10 on the PGA Tour since last May before the PGA Championship, so you can expect the Spanish star to make a run at the winner’s circle this week.

Rahm will get his tournament started on the later side Thursday, beginning the opening round at 5:35 p.m. ET. He’ll play in the second-to-last pairing alongside gold medal winner Xander Schauffele.

Check out complete first-round tee times for the 2022 Sentry Tournament of Champions below.

2022 Tournament of Champions Round 1 tee times (All times ET)