Bryson DeChambeau may have overpowered the Augusta National range 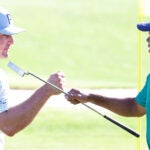 Bryson DeChambeau and Tiger Woods bump fists after a practice round at Augusta National on Monday.

“Ouch,” said Kenny Harms, a caddie who was recording the drive.

Ouch. To the ball.

“There you go,” DeChambeau said.

“200?” Harms asked, referring to the miles per hour of ball speed. No one had ever cracked 200 mph in a PGA Tour tournament – until DeChambeau at last month’s Shriners Hospitals for Children Open, his last tournament.

The drive on Sunday carried 362 yards. GOLF’s Alan Bastable measured the range, on Google, at just under 380 yards. And just past the range sits the Augusta media center.

“The media center is definitely in play,” DeChambeau told GOLF’s Sean Zak on Monday. “I have to hit it to the right a little bit; I’m hitting it into the trees to the right, for sure.”

Cover your heads. DeChambeau has descended upon Augusta ahead of this week’s Masters, the year’s final major.

Since we saw him last, period, at the Shriners, DeChambeau said he was taking off a month in preparation for the Masters. He’s been experimenting with a 48-inch driver, which, presumably, would give him more length. (Harms wrote on Instagram that the range drive was not with the 48-incher.) In late October, he said he carried a drive 403 yards. A few days later, he said he hit 208 mph ball speed.

All for this week. Yes, Georgia has been on his mind. Recently, he played a practice round with former Masters champ Sandy Lyle, and the numbers, according to a former Tour player, were “jaw dropping” – among them, a wedge into the 445-yard, par-4 1st hole; an 8-iron into the 575-yard, par-5 2nd hole; a 3-wood over the green on the 350-yard, par-4 3rd hole. On Monday, he played a practice round with Tiger Woods, Justin Thomas and Fred Couples, and GOLF’s Dylan Dethier and Luke Kerr-Dineen said DeChambeau had simpler shots into the 510-yard, par-5 13th and the 465-yard, par-4 18th.

DeChambeau, of course, knows, too, distance can only take him so far.

“Length is great, guys, but if you’re not chipping and putting, you’re not going to win,” he said.

Tuesday, he’ll be back at Augusta.