Has Augusta National been adding secret trees to guard the course? 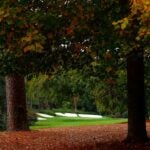 Augusta National's 13th hole, with a hint of fall colors.

“It’s fun coming back here because they don’t tell you what they’ve done,” DeChambeau said, referring to the course’s mystery year-over-year changes. “Then it’s all about who prepares the best.”

DeChambeau is hardly the only bomber teeing it up at Augusta National this week, but he’s certainly been the most vocal about dismantling the course with his newfound distance off the tee. Ever since his weight-and-distances gains began a year ago, he’s had this course specifically in mind, and this approach: He plans to bomb it over the corner at No. 1, leaving just a half-wedge into the green. He wants a mid-iron into the par-5 2nd, he wants to drive the 3rd green, he wants another mid-iron into the par-5 8th. At No. 13, he’d like to get even more aggressive, taking it over the left trees to leave himself just a wedge to the green. That’s where the trees come in.

“There is a new tree by the tee box,” he said. “There’s a couple. They like putting trees in there.” He described his potential options — he can go “under one tree and over the next one,” he can hit it through a relatively conservative “V” in the trees, or he can hit it through the uprights and go down an aggressive “V” that has been recently visited only by the likes of Bubba Watson.

So what do we make of DeChambeau’s claim? Has Augusta been adding trees to guard against aggressive corner-cutting from the Masters’ longest players? It wouldn’t be the first time; the club has utilized tree-planting in the past to frame up holes and encourage certain lines of play. When the course famously tried to “Tiger-proof” in the early 2000s, part of their strategy was to plant trees to prevent Woods from going driver-wedge into the par-5s, especially the 13th.

“They’ve done it before, and what they do with the tee markers over the years — sliding it more to the left, and it seems like every year the trees get a little taller,” Woods told Golf Digest of the 13th. “They’ve added more pine straw up the right side over the years, planted a few more trees in there.”

Jordan Spieth agrees; he sang DeChambeau’s praises on Subpar last month, and he, too mused about the potential for some added foliage.

“I wouldn’t be surprised if they start to either put in more trees — they have a whole nursery of giant trees next door; they can just take and put it in,” he said. “It’s wild how quickly they can do that and make it look like it’s been in there for 50 years. It’s gonna be really interesting to see that tactic and to see how other people do it.”

Spieth raises a good point: Adding trees is in Augusta National’s DNA. Before they grew grass here, they grew trees and plants — all the time.

In 1857, Baron Louis Mathieu Edouard Berckmans and his son, Prosper Julius Alphonse, purchased an indigo plantation and opened “Fruitland Nurseries,” importing plants and trees from all over the world. Plenty of trees on property have been here since the 1800s, and they became an integral part of the routing when Bobby Jones and Clifford Roberts purchased the land for $70,000 in 1931 and built a golf course. Many of the holes are named after trees: Flowering Crab Apple White Dogwood (No. 11), Chinese Fir (No. 14), Redbud (No. 16) and plenty more. No. 13 is named “Azalea,” after the iconic plant, which Fruitland Nurseries made popular. Trees and plants are at the very essence of this place.

And so the planting continues. The trees on the inside of No. 13 aren’t the only ones, DeChambeau said. He said there are some on the outside of the hole, too, narrowing the landing area. He added that there’s a new cluster guarding the area past the fairway bunker on No. 18.

New trees or not, DeChambeau didn’t seem to mind. He punished several drives off the 13th tee and was left with wedge into the green, while on 18 he flew driver over the left fairway bunker — 28 yards past the last tree, according to GOLF.com yardage expert Luke Kerr-Dineen — leaving an unobstructed view of the green.

DeChambeau insists that he has his sightlines figured out and has already developed a game plan with driver. Still, he recognizes that distance alone won’t get him over the finish line. “It’s mainly putting,” DeChambeau said. “Length is great, guys, but if you’re not chipping and putting, you’re not going to win.”

I took a stroll down to Amen Corner to solve the mystery myself. I studied some aerial photos, looked at some side-by-sides, compared different angles. The results? Inconclusive. Augusta National doesn’t talk about stuff like this. (They don’t talk about much!) So we’ll just have to watch carefully, admire DeChambeau’s towering tee shots and try to figure it out for ourselves. It might take more than a forest to stop him, anyway.