Bryson DeChambeau hits a drive even he hasn’t hit before 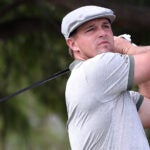 Bryson DeChambeau during the Shriners Hospitals for Children Open two weeks ago.

Bryson DeChambeau is practicing at his home in Dallas. The PGA Tour is playing the Zozo Championship in Thousand Oaks, Calif. They are about 1,500 miles apart.

While his fellow Tour pros were hitting shots at Sherwood Country Club on Friday, DeChambeau hit at least one driver. Far. Even for him, the Tour’s longest player.

“First time over 400 yards. Carry,” DeChambeau wrote on his Instagram story above a photo showing an iPad with 10 numbers for the drive.

It rolled another 11 yards, according to the iPad. He also hit 211 mph ball speed. At the Shriners Hospitals for Children Open two weeks ago, DeChambeau became the first player in a Tour event to crack 200. At exactly 200.

He could go longer.

DeChambeau said before the Shriners that he might use a 48-inch driver at the Masters in three weeks. Which, presumably, would give him even more length off the tee. DeChambeau is not playing another tournament from the Shriners until the Masters, and he said he would practice with the longer driver.

It’s not the club he used on Friday.

“I don’t know how many drivers I’ll hit, but I’ll hit as many as I need to,” DeChambeau said after the Shriners. “And from a speed-training perspective, I could probably go upwards of over 1,000 to probably 2,000, around 2,000 drives the next four weeks trying to get my speed up.”

“You have to admire his work ethic,” analyst Paul Azinger said Friday on the Golf Channel’s broadcast of the Zozo. “I mean, everything Bryson does is with a purpose, and he’s converged math and science, and he’s put this physical body with this math and science. He’s launching at a trajectory with an amount of spin and speed that is giving him this 400 yards.

“It’s sort of alarming, I would think, to the USGA and everybody else, but you can’t put a leash on that dog. You can slow the ball down and all that, but you can’t take me out of the gym. And I really admire Bryson. He really does everything with an intent and a purpose.”

How fast are Augusta’s greens? This water bottle story may stun you

Hideki Matsuyama: 5 things to know about the Masters frontrunner

At the Masters, even missing the cut brings a payday unlike most other tournaments