What I learned wandering Augusta National on Masters Monday 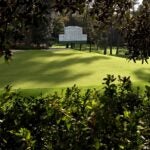 Augusta National is a nice place for a stroll.

AUGUSTA, Ga. — There was plenty of traffic on Washington Road Monday morning in Augusta, Ga. A lineup of cars wound through the Wendy’s drive-thru. Young men and women in light-blue scrubs drove towards Augusta University Medical Center. And a steady trickle of polo-shirted volunteers turned onto Berckman’s Road, where they parked in several well-manicured fields and made their way through the gates at Augusta National Golf Club.

There are no fans at the Masters this year. This much you already know. But it takes plenty of personnel to make this tournament run, from the grounds crew to the spotters to the volunteers and untold others. There are fewer reporters than usual, but a few of us are fortunate enough to occupy the cavernous media center, one of every three seats occupied.

The sun was out, and the course was empty, and Augusta National was a fantastic place for a stroll on Monday morning. That much is always true. I walked the back nine and zig-zagged across the property, taking it in. Here’s what I learned wandering the course.

Look, some of these observations are going to be extremely obvious. I won’t apologize for it! But if you’ll recall what Augusta National typically looks like in late summer, they scalp the Bermudagrass and the entire place looks unmistakably brown. That’s not the case at the moment. It’s green green green. Overseed green. Lush green. The fairways are green. The tee boxes are green. The walkway to the media center is green. The grass next to the volunteer parking lot is green. These lawns would make your neighbors jealous. You get the idea.

Thus far, the fairways and greens are lush and soft. Players are spinning wedges back off the fronts of greens. Drives are hitting and sticking. There’s nothing firm nor fast about the place just yet. (Well, except the greens. They’re still fast.) Could this change? Yes; you’ve heard plenty about Augusta National’s Subair system and the extent of its ground-drying capabilities. But it could also easily stay soft — the forecast calls for significant rain on Wednesday, Thursday and Friday, with shower potential other days, too. Time will tell how the course plays for the event, but for now it’s quite friendly.

Yes, there’s a ton of green, and the entire place is in outrageously good condition. But a careful look at the fairways and greensides reveals something interesting: There’s still some Bermudagrass peeking through the ryegrass overseed. That Bermuda grows sideways and adds a different grain and texture to the ground surface; it’s pesky stuff, and likely hung around extra this year because it’s been so warm. What does this mean? Not much for you or me, but it’s another small factor for golfers navigating touchy pitch shots around Augusta National’s slopes.

Rory McIlroy described the situation to ESPN’s Bob Harig. “That’s going to make things very interesting around the greens. Chipping will be a lot trickier,” he said.

4. This version is Augusta National.

It felt particularly strange to see Collin Morikawa teeing it up on No. 1 at 8:20 a.m. just sort of — out there. No ropes. No spectators. No officials. Just player, caddie and a handful of cameramen on a green tee. It requires a shift in mindset, and serves as a reminder that this is what the course usually plays like. This is how the members usually see it! Day to day, there are no people lining the fairways like bumpers at a bowling alley.

But this isn’t necessarily a bad thing! Let’s refer back to some other comments that Rory McIlroy made about Augusta National at the Zozo Championship a few weeks ago:

“My favorite times at Augusta have been not the Masters. My favorite times are, we’ve taken a couple of father-son trips, which has just been awesome. I think for a golfer, the greatest experience in golf is being invited to Augusta by a member, staying in one of the cabins, doing the dinners at night, going down to the wine cellar, picking your bottle of wine, all that sort of stuff. Those are the cool things about Augusta that a lot of people don’t see.”

Unless something really strange happens, I don’t expect to get access to the wine cellar this week — but the Augusta National we’ll see will be far more similar to the day-to-day member’s course than usual.

For a while, it felt like Morikawa was the only player on the entire course. But as I strode down No. 10, to 11 and around the back nine, I found a course filled with volunteers who were there to accommodate players’ every needs. They had no fans to direct, no players to greet, no golf balls to spot. They paced around the pine straw instead, trading war stories with fellow volunteers. For most, this ain’t their first rodeo. On a sunny Monday morning, it’s a nice place to hang out.

For the most part, as Ian Poulter pointed out in a video yesterday, Augusta mostly looks like it always does in April. But there are hints of color all around. Some orange and yellow has crept into the trees behind No. 12, and there are actually fallen leaves on the ground (a rarity) and the course reminds you that this is November, and the year is waning rather than beginning. This is hardly pumpkin-spiced Augusta National, mind you. It looks natural, with holly bushes outnumbering azaleas. But it’s a little different.

This is my third Masters, and every time I arrive on property I’m struck by one thing: just how much space there is that isn’t even a part of the golf course. You could have a picnic in about a dozen different sections of the course without ever fearing danger from a stray tee shot. Without spectators, the effect is exaggerated — it feels like you could hit the ball anywhere out here.

There are also a few places where that space — when combined with Bryson DeChambeau’s newfound, prodigious length — feels like a gamechanger. Take No. 11, a terrifying tee shot that’s far less terrifying if you can carry all the trees down the right side and settle in a beautiful, untrampled lie in the first cut. That feels like a very real possibility.

As a reporter at golf tournaments, I’m constantly aware of where we as media members are allowed to be. Some events, you can push back on those rules, sneak under those ropes, etc. The Masters isn’t one of them, particularly during a global pandemic. But here’s the thing: this year, there aren’t any ropes to stay behind. Instead, there are some subtle dashed lines, painted dark green, indicating where members of the media should stay — but it’s not always clear. On the one hand, this is incredibly freeing! It feels like the course is at your fingertips, and you can wander wherever you want. On the other hand, it’s unsettling, because “right” and “wrong” is slightly less clear. There’s a fine line between unprecedented access to the golf course and its players and being ever-so-politely escorted off property. Fingers crossed that we can walk that line.

9. This part of town is empty.

As I walked into Jersey Mike’s to pick up a sandwich yesterday afternoon, I noticed a man in line wearing a bright orange-and-blue University of Florida mask (a Gator gaiter, I think you could call it) jawing good-naturedly with some teenagers wearing Georgia Bulldogs gear. As he walked away, sandwich in hand, one elbowed the other.

“Do you know who that is? That was Billy Horschel! He’s playing this week!”

When I walked into CVS later in the day to pick up some toothpaste, who came ’round the corner but Chris Como, coach to Bryson DeChambeau. He was picking up some snacks and was eager to report that he’d received official word of a negative coronavirus test, which is the best early-week news you can get at the Masters.

What’s the point? Not much, really, except to say that without fans, this part of town is absolutely crawling with Tour pros and associated figures. Augusta National has always existed in stark contrast to the neighborhood around it (fast food, strip malls, grocery stores, Christian bookstores) but the ratio of “pros” to “other people” is higher than ever.

I’m generally skeptical of the “aura” of Augusta. With that said, a few ingredients make it a spectacular place to go for a walk. Chief among them: A couple phone-free hours is fantastic for the soul. Monday morning, there were hardly any golfers — and therefore hardly any golf — to serve as a distraction. I listened to the birdsong (mostly real, I think, despite the rumors). I looked for squirrels (there aren’t many of ’em). I noticed the texture of the grasses and the fifty shades of green and the ever-so-subtle purple hue on some of the putting surfaces. I noticed the Monday pins, which are far more difficult than the Sunday pins because they’re on the very edges of the greens, put there to preserve the actual pin positions from unnecessary wear and tear. I tried to imagine the bleachers, which aren’t there, and I could picture most of ’em but forgot some others. (I hope some guys go long on No. 8 this week; no more backstopping there!)

In all, the walk was a reminder that golf is a sport where we can celebrate the ballparks as much as the athletes that play in those parks. This is a big, green park. We all have plenty of memories from golfers playing on it. And I’m eager to watch them make some more.