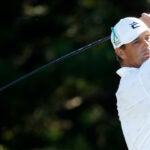 He was there to talk about his play at the upcoming Saudi International, which he did. He also talked about the controversial circumstances in playing it. “So not a politician, first off,” he said. “There are — I’m a golfer, first and foremost, and I want to play where the best golfers in the world are going to play. And that is the end of the story for me.”

And in his first press conference with reporters since the Ryder Cup in September, and just his second since the Open Championship in July, Bryson DeChambeau talked about why he’s lowered his expectations, too. And his low point of a year ago, when “I was just like, you know what, I don’t really need this anymore. This once great game that was giving me so much just turned quite a bit on me.”

He also explained why he’s not involved in the upcoming PGA Tour Netflix series. And why he ditched his signature driving hat for a more conventional baseball one during last week’s Tournament of Champions.

In other words, it might be shorter to write what wasn’t discussed Thursday. (Brooks Koepka was not, for what it’s worth.) Still, we’ll try to break down all of DeChambeau’s 30-minute, wide-ranging, question-and-answer session below.

Why DeChambeau has lowered expectations

Ahead of the November Masters of 2020, and shortly after DeChambeau’s win at the U.S. Open for his first major victory, you may remember the following prediction from DeChambeau.

“I’m looking at [Augusta National] as a par-67 for me because I can reach all the par-5s in two, no problem. If the conditions stay the way they are, that’s what I feel like par is for me,” he declared on the Tuesday before the tournament. “There is definitely a possibility I don’t play well, and I could shoot whatever everyday and shoot a lot over par relative to my par and still play decent.”

You may also remember what happened — he tied for 34th. That’s part of the reason, he said, he’s dialing back his expectations.

“Yeah, definitely reined in,” DeChambeau said. “I think there are times when you have such high expectation levels and you put so much pressure on yourself. 2020 Masters, that Thanksgiving Masters, I had so much pressure on me, and it was definitely a different feeling that everyone was watching me and seeing how I’m going to play the golf course and whatnot.

“That definitely threw me for a loop. I’m OK with it. I’m learning. I’m still learning. Now that time has gone on and people realize that distance isn’t everything, but it’s a huge factor and it’s fun to watch. I think it’s great that people are settling into going, OK, he did this. It’s cool. But now what are the expectation levels, and what’s he going to do now?

“For me, I’m going to continue to grow my game in the best way I possibly can, being a better putter, chipper, wedger, long driver, everything. As time goes on, I have to rein in those expectations and just learn to be me. Don’t try and be anybody else.

“I feel like as time has gone on I’ve got people around me that have helped me understand who I am at a better level and continue to grow in the way that I want to grow. Obviously, I’ve had struggles in the past with different, numerous things that have gone on. We can talk about that another time. But I’m continuing to learn and grow and respond in ways that help the game of golf.

“That’s honestly all I want. I don’t want to be a super controversial figure.”

When was DeChambeau’s ‘low point?’

Ahead of the Hero World Challenge in early December, DeChambeau told the New York Post that he had considered quitting professional golf after a summer that included a renewed feud with Koepka, a breakup with his caddie and pushback around comments he made on the Covid vaccine. On Thursday, DeChambeau said his “low point” came before the WGC-FedEx St. Jude Invitational in early August, one week after he was forced to withdraw from the Olympics due to a positive Covid test.

“Yeah, again, it goes back to that expectation level question that I had,” DeChambeau said. “It was changing my perspective on everything. Everything was so heightened with how far ahead — oh, he’s going to win every week. He’s going to do this or that or whatever. Sometimes the letdowns were super difficult.

“Then last year with everything going against me, whether it was media, the players or whatever it was, it became a lot on a human being. It’s amazing what people can do when they tell you you’re this all the time or that all the time when you know it’s not true personally in the background.

“But as time goes on, you have to realize what are you doing this for? Why are you doing it? And how can you continue to improve in that quest in inspiring a next generation or inspiring someone to work harder? I think that’s really where it changed. …

“A lot of it was, people could say, brought on to me by myself. I understand that, but, again, the two things, three things I’m trying to accomplish is inspire and grow the game of golf and be a positive influence for the world. Those are the three things I really want to do.

“Sometimes it’s difficult. Sometimes I fail at it. Sometimes I get mad and frustrated like everyone else does, we’re all human. The biggest part is I hope people realize we’re all human. As much as I’m trying to influence the game of golf in a positive way, people are like, no, we don’t like that or we don’t want that change, that’s not what is good for the game. Whatever their thoughts are, I just hope people have a different level of respect no matter what. They don’t try and push anyone away.

“I think that’s where things got to, and it’s just very disappointing for me to feel like I was just getting hammered all the time. I was just like, you know what, I don’t really need this anymore. This once great game that was giving me so much just turned quite a bit on me. I feel like it’s not worth it anymore. As time has gone on, that has changed. I have grown. I have learned the place that I’m in. Is it difficult and frustrating sometimes still? Absolutely, just like anything.”

What does DeChambeau think of the new rule on greens books?

The TOC also represented the first tournament in which players must use “committee approved” yardage books, and any handwritten notes about the greens must come directly from the naked eye (i.e., no measuring instruments). A reporter asked DeChambeau: “Did you find that challenging? Did it specifically change, I guess, your routine when you’re putting? If so, how?”

“Well, it took a 13-year process that I’ve worked with numerous people with,” he said. “Worked with Putt View on it as well. I did AimPoint back in the day. Worked through the whole process. They took a process that I’ve done for 13 years and numerous other people have done for a long time and nixed it. It is what it is. The Tour decided that, the PAC decided it, the players decided it, and I respect it.

“It is what it is. I can’t say much more about it other than it’s a bit disappointing because I think there’s a lot more traction around the hole now and people are standing around the hole. Whether that has an effect, I don’t know.”

Why isn’t DeChambeau in the upcoming Netflix series?

Netflix, as our Dylan Dethier reported on Wednesday, is to begin work on a much-anticipated, behind-the-scenes series featuring 22 Tour pros. But among those not included is DeChambeau, and he was asked why.

“No. I think it could potentially grow the game of golf in that regard,” DeChambeau said. “I feel like people in the United States — there’s a lot of factors going on in that. One, there wasn’t a deal that was struck that was very well for my side of it. I love Netflix. I watch it. I have a great time with it. But just for me it wasn’t right at the present moment.

“I feel like people are seeing me on YouTube, Instagram, and they’re getting a pretty dang good look inside my life. And to have more people come in and go even farther, which is almost impossible for what I’m giving out is just overall too invasive for me. I didn’t really want any more than that because I do have to have a life outside of it.

“There’s a lot of great people on there. If I was to go on there, yeah, it would be cool to see, but I feel like there’s a lot more interesting stories. You’ve got Harry Higgs. You’ve got numerous others. I don’t want to take the light away from them for their potential to grow themselves in a manner that’s unique to them, where they’re already pretty far behind. They have the opportunity to grow a lot more than I do in that regard.

What happened to DeChambeau’s signature cap?

DeChambeau, in a nod to Ben Hogan, has worn a driver cap since turning pro in 2016. His logo is even an outline featuring the hat above his head. So after turning up last week at the TOC with a more traditional lid, it led to this question: “What’s up with the cap?”

“I wore the normal hat — or I wore the driver cap back in Hero,” DeChambeau said. “So last week was just something a little different. I feel like I’m turning a bit of a page in my life, in my chapter and my book.

“As I’ve always said, I’m always evolving and changing and growing and adapting. It’s just another one of those things. I don’t know if it will be a thing to stay or it pops up randomly, sometimes randomly with the normal driver cap. It’s going to be one that is just going to keep you guys on edge, I guess. It just depends on what I feel like and what I’m comfortable with that week.”