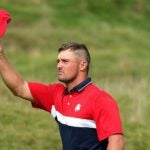 Bryson wanted to show his teammates respect and unity

HAVEN, Wis. — The was a different aura around the U.S. team this week. The problems that have plagued this team in the past were seemingly nonexistent over the past several days.

There was no talk about individuals, no grumbling about pairings, no cryptic critiques of the captain. Just unifying words about teamwork, togetherness, and mutual respect.

To a man, every U.S. players was effusive in their praise of Captain Steve Stricker, and each other. And that spirit led Bryson DeChambeau to make a small, but significant, decision: To trade in his signature Ben Hogan-style cap for a more traditional silhouette.

“Team unity,” he said. “I want to look like everybody else this week. It was for Team USA.”

Whatever it was for, it worked. Check out his full remarks in the video below.