‘I don’t think you can ever figure this place out:’ Bryson DeChambeau vaults into Masters contention 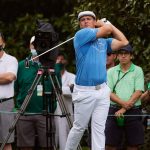 Bryson DeChambeau surged into contention with a brilliant back nine on Friday.

DeChambeau was the clear betting favorite leading into November, and everyone — himself included — seemed to think he was poised for an Augusta romping in the vein of Tiger Woods in 1997.

“I’m looking at [Augusta National] as a par-67 for me because I can reach all the par-fives in two, no problem. If the conditions stay the way they are, that’s what I feel like par is for me,” he declared triumphantly on the Tuesday before the tournament. “There is definitely a possibility I don’t play well, and I could shoot whatever everyday and shoot a lot over par relative to my par and still play decent.”

What followed was a classic Augusta National lesson. While the rest of the field lapped up easier-than-usual scoring conditions to record-low scores, DeChambeau struggled to break par at Augusta. After shooting two over on Thursday, he finished tied for 34th, 18 strokes off Dustin Johnson’s 72-hole total.

This year, Bryson returned to Augusta National with a fresh dose of reality.

“Clearly the par was 74 for me last year,” he said Friday. “But I would say for the most part, I think this golf course is an amazing and spectacular, challenging venue and championship. I think one of the most amazing things about this place is that it can turn on you real quick when you least expect it.”

But even with renewed perspective, DeChambeau’s performance didn’t look all that different on Thursday — an ugly opening-round 76 left him an afterthought on a crowded leaderboard. On the course, he looked decidedly shell-shocked. Iron shots blasted over his intended yardages and putts rocketed past the flagstick — or made it only halfway there. He and caddie Tim Tucker rifled through their yardage books and spoke intently, but the results weren’t changing. After a bogey on the par-4 5th hole on Friday, DeChambeau dropped to five over for the week and firmly in danger of missing the cut.

Then, the switch flipped on.

DeChambeau played the final 13 holes on Friday at six under, recording seven birdies to only a single bogey and moving within six strokes of Justin Rose’s lead. Ironically, his blistering pace was carried by two of the weakest parts of his game through the previous 95 holes at Augusta National: putting and iron play.

“I finally felt like I was seeing lines out there for the first time in five years, it feels like, or five times I’ve played it in tournament conditions,” DeChambeau said. “That excites me, for sure. I think if I could just ball strike it a little bit better. Felt like my iron play was great. We didn’t hit it long too many times today. I was proud of that. If I can keep myself positive, in a positive mindset and toward making a lot of birdies, you never know.”

By the time the dust settled, DeChambeau climbed back under par for the week, placing himself a moving day charge away from the lead. More importantly, he’d seemingly found his footing at Augusta for the first time — as much as anybody can.

“I don’t think you can ever figure this place out,” he said. “There’s so many things going on around here. The wind makes it diabolical. It’s flying around through these trees and bouncing off the trees and making it feel into the wind when it should be downwind, and vice versa. I don’t think you’ll ever be able to figure it out, but I’ve just got to be more comfortable.”

Speaking of conditions, Saturday could prove to be the most uncertain day of tournament week. Wind gusts upward of 20 mph are expected throughout the afternoon, and rain is in the forecast for later in the evening. It’s possible, though unlikely, that DeChambeau would make up ground Saturday simply by staying the course. He tees off at 1 p.m. ET alongside Aussie Matt Jones.

“For some reason every year I get here, I’m playing pretty well coming in and I don’t execute the way I want to,” DeChambeau said. “Today was nice to be able to get it back and shoot 5-under, get myself somewhat in contention.”

DeChambeau enters the weekend seeking his first-ever top-20 finish at the Masters — a surprising stat for a player whose game seems primed to take advantage of Augusta National in much the same way Woods did two decades ago. Woods had near-immediate success at the Masters at the beginning of his career, but even a five-time green jacket winner has lost far more Masters than he’s won. That’s the nature of the tournament, as DeChambeau sees it.

“You have to experience failure in order to understand what success is,” DeChambeau said. “It’s just not realistic to have success all the time. That’s what’s so great about this golf course.”