Latest PGA Tour rules change is live. Here’s what the players think of it. 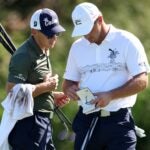 One day in and the field at the Sentry Tournament of Champions can agree on three things: the Hawaii weather is nice, the Kapalua course is soft and those changes to green-reading books, well, no big deal after all.

Much was made of the imposed limitations on those handy guides that some players and caddies have grown dependent on. The PGA Tour’s local rule banned notes gained from any type of measuring instrument, asserting that players must use “committee approved” yardage books and any handwritten notes about the greens must come directly from the naked eye. (Amateurs are still free to use the books or other green-reading apps.)

Most of the objection to the changes came in the form of If we’re okay limiting this, then where do the local rules stop? Caddie-turned-broadcaster John Wood penned a widely-read column for Golf Channel and has discussed the matter at length on social media.

But one thing Wood was keen to point out: this rule stemmed from multiple Player Advisory Council meetings. It’s player-driven. And to little surprise, one round in to 2022 and not a single player decried the rule to the media. In fact, most of them don’t have any issue with it at all.

“I’ve never used a green-reading book,” Kevin Na said. “I remember last year at Sony Open I looked at it one time on 17 when I had a chance to shoot 59 and it didn’t work out too well, so that was the last time I saw it.

“Now, Kenny carries one, my caddie, used to carry one, and we, he would look at it here and there. So I don’t feel like it’s a huge change for me because we’ve never really looked at it a lot. So I actually like it that it’s gone. So I feel like Kenny and I am a pretty good green reader out there so it’s an advantage for us.”

Cameron Smith and Viktor Hovland, two happy men who shot in the 60s Thursday, both called themselves “feel” putters, who rely on the AimPoint reading system rather than notes in a book.

“I like [the rule change],” Joel Dahmen said. “I probably bury my head in them too much as it is. I don’t use them at home and I putt okay, so there’s no real reason to have them out here for me anyway.

“But it’s a little more work for the caddie on Tuesday and Wednesday for them to get the slopes and the grain out there, but for me it’s worked out okay so far.”

So far, so good. Dahmen shot 68. From the smattering of pros in Hawaii, the responses all seemed to stem from little-to-no player use. Patrick Cantlay says he would only reference the books on occasion. Taylor Gooch, like Dahmen, thinks he’s spent too much time calculating reads based off the book. He wants to be more reactive, he said, and is excited about the change.

Garrick Higgo, moments after shooting 68, said he’s never used one of the books, and believes green-reading to be a skill. That’s going to be the PGA Tour m.o. this season, just watch. Skill is at the center of the rule’s purpose, as laid out in the Dec. 1 memo sent to Tour members: “to return to a position where players and caddies use only their skill, judgment and feel along with any information gained through experience, preparation, and practice to read the line of play on the putting green.”

No doubt some players will be annoyed by the change. DeChambeau might even be one of them, though he stuck to his late 2021 trend and did not speak with the media after his round. Like DeChambeau, Erik Van Rooyen relied on detailed books frequently in the past, but he’s already ready to moved on, saying, “I’ll figure it out. No matter what they do, I’ll figure it out.”