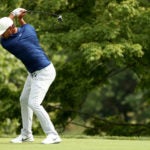 Brooks Koepka hits his drive on the 5th hole at Muirfield Village Golf Club on Friday.

Brooks Koepka had one of the worst 26-hole scores. Standing on the 9th tee at Muirfield Village Golf Club, he was 5-over during the second round of the Workday Charity Open. He was done.

“Yeah, I mean, that’s what you’ve got to do,” Koepka said. “I never give up, never think you’re out of it, and you’ve just got to battle through it no matter what you’re doing. That’s part of why you’re out here.

Koepka did it with his iron play.

“It was pretty gutsy,” said Justin Thomas, one of Koepka’s playing partners the first two days. “I would still take it as a chance. … But it’s a funny game. I’ve been in that position before, unfortunately, or we all have, but it’s almost like when you stop caring you start playing better. There’s a lesson somewhere in that, but it’s hard to go out there and play and not care.”

The finish, apparently, was good enough for Koepka to play at Muirfield Village next week, too.

The Memorial will also be Bryson DeChambeau’s first tournament since winning the Rocket Mortgage two weeks ago. DeChambeau, at times, has recently referred to himself as the “house” or the “casino” with his game, which has undergone a muscular metamorphosis – he wants to put the odds in his favor. DeChambeau and Koepka, at times, have also feuded.

Koepka used a gambling reference when asked about playing next week.

He’s currently 155th in the FedEx Cup standings, and only its top 30 make the Tour Championship in Atlanta in early September. Koepka said he needs to make a run.

“I think it’s pretty simple,” Koepka said. “I didn’t plan on playing, but things change, and I’d like to be in Atlanta. That’s what you’ve got to do.