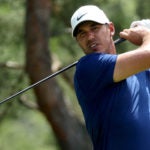 In his latest feud with a golf analyst, Koepka was not fine with Paige Mackenzie saying he should be fined. On Thursday, the Golf Digest Instagram account posted a photo of Koepka rubbing his forehead during the first round of the Workday Charity Open and wrote “caption this.” Koepka did.

“When you hear that annoying voice on tv and look up and see it’s @paigegolf,” Koepka wrote.

On Thursday morning, Mackenzie was on TV discussing Koepka.

During Golf Channel’s “Morning Drive” show, Mackenzie said a Koepka tweet earlier in the week was “completely unprofessional.” The tweet was a gif of the fictional character Kenny Powers, from the HBO series “Eastbound & Down,” running toward a cameraman and included a caption that read “Kenny Powers confronts steroids allegations” – which Golf Channel believed may have been a shot at Bryson DeChambeau

“I completely disagree with this,” Mackenzie said. “A: I don’t think it’s very professional to put that out there. Either he was making fun of Bryson’s tussle with the camera guy, or accusing him of steroids – one or the other. I thought it was completely unprofessional. I think it’s beyond shots fired. I think he should have been fined by the PGA Tour. I certainly hope he is because you don’t treat your fellow competitors that way.

“I know it’s supposed to be some sort of joke, I guess. But to me, it’s serious. There’s nothing more serious in this game than being accused of cheating or doing something against the integrity of the game. So I’m adamantly opposed to him doing this. And I now feel like he’s put a bigger target on his back to perform. He’s putting himself in a position of failure, frankly. Unless he goes out and wins this week, it’s laughable what he just did on social media.”

Mackenzie is not the first analyst to have a Koepka conflict.

He’s had a long-running feud with Golf Channel’s Brandel Chamblee. In early May of last year, Chamblee said that only two players — Dustin Johnson and Rory McIlroy — were capable of challenging Tiger Woods as the No. 1 player in the world. Koepka, aware that he had been left off that list, first responded with a tweet showing Chamblee wearing a clown nose. Koepka then responded by winning the PGA Championship a few weeks later — which included a first-round 63 and a Chamblee response of “I felt like he was giving me the finger for 4.5 hours today.”

Koepka has developed a recent feud with analyst Nick Faldo. Koepka, when asked at last month’s RBC Heritage if players should be mic’d up, said, “If the announcers would just shut up and listen, you could hear every word that we’re talking about.” During Friday’s coverage of the RBC Heritage on Golf Channel, Faldo obliged during a Koepka tee shot, then, after a few seconds, said, “Yeah, fascinating stuff.” Two days later, the PGA Tour tweeted out a video of Koepka making an eagle on the par-4 9th at Harbour Town Golf Links, and during the rain delay that soon followed, Koepka quote-tweeted the video.

“Fascinating stuff out there…” he wrote.