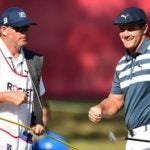 Bryson DeChambeau fist-bumps his caddie, Tim Tucker, after his victory at the Rocket Mortgage Classic.

Who cares how far his drives go?

Who cares about his weight gain?

Who cares that he eats bacon and drinks six, seven, eight, nine, whatever protein shakes?

Bryson DeChambeau hasn’t won. He actually hasn’t won since November of 2018. Which was even before he embarked on his ambitious journey to become his own physics project – weight + force = a massive amount of wins. Starting last year, DeChambeau added upward of 40 pounds, he added near-PGA Tour-best distance to his drives, and he added to his bill at the nutrition store. All of it was essentially the equivalent of maybe a nice head cover on his driver, or maybe the sauce on his steak. He just looks better. He hasn’t won. Who cares?

DeChambeau shot a 7-under 65 at Detroit Golf Club on Sunday to storm from three shots back entering the final round to win the Rocket Mortgage Classic by three shots over Matthew Wolff, the third-round leader. It’s DeChambeau’s sixth PGA Tour win and, yes, his first since the Shriners Hospitals for Children Open.

“This is a little emotional for me because I did do something a little different,” DeChambeau said. “I changed my body, changed my mindset in the game, and I was able to accomplish a win while playing a completely different style of golf. And it’s pretty amazing to see that, and I hope it’s an inspiration to a lot of people that if they set their mind to it, you can accomplish it.

“It just takes a lot of hard work, a lot of figuring out things that you may not know and understand yet, but if you keep going down the line and you keep working on it, figuring stuff out, eventually you’ll get a little bit better each and every day and hopefully that leads to something great in the end.”

DeChambeau entered Sunday three shots behind, was tied for the lead after three holes and had at least a part of the lead after four holes. His advantage eventually ballooned to as high as four shots, and as high as five shots over Wolff. After just over the halfway point of his round, DeChambeau was eight shots better than Wolff.

DeChambeau played 11 through 15 1-over, the biggest drop being an actual drop after he hit into the rocks on 14 on his way to a bogey. Wolff played the holes 3-under. And for a moment, DeChambeau’s lead was one.

For just a moment. About two minutes later, DeChambeau rolled in a 30-foot putt to birdie 16. Two-shot lead. On the par-5 17, he pounded an 8-iron from 230 yards out to within about 22 feet, and he two-putted for birdie. Three-shot lead. Wolff then birdied 17 to draw within two.

On 18, DeChambeau hammered a 367-yard drive, the longest on the hole for the day, then hit a wedge to within about 3 feet for another birdie. Three-shot lead. Three-shot win. His lead down to one, DeChambeau birdied his final three holes.

Wolff steadied after a rocky first 10 holes, where he was 3-over, and finished with a 1-under 71.

Kevin Kisner tied for the day’s second-lowest round with a 6-under 66 and finished third, five shots behind DeChambeau. Ryan Armour, who also entered Sunday three shots back, was among four golfers who finished six shots back and tied for fourth.

Wolff led by three entering the round. He led by one after the 1st hole. He never led again after the 5th hole.

On 1, Wolff dumped his drive in the trees on the right side of the hole and could only punch out before settling for a bogey 5, while Wolff’s playing partner, Armour, made birdie, as did DeChambeau in the group ahead. Four holes later, the lead was completely gone. DeChambeau birdied 3 to catch Wolff, and each player birdied 4 – Wolff’s coming on a 50-foot putt – before Wolff played holes 5-10 at 3-over to fall too far back.

He didn’t fall down. Wolff played his final seven holes at 4-under and drew within a shot once and almost twice.

On 17, down three strokes, Wolff drove it 359 yards down the right side of the fairway, knocked his approach to within about 14 feet, then saw his eagle attempt come up 2 inches short. DeChambeau birdied 18, and the final margin was three strokes.

“It was definitely a grind out there,” Wolff said. “Didn’t start off really well at all, wasn’t hitting it how I was the beginning of the week and feel like I was really getting some bad breaks as well, which was pretty unfortunate.”