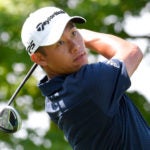 Collin Morikawa missed the cut in his last tournament. That streak did not last long. Morikawa is the leader after two days of the Workday Charity Open, his first tournament after he did not play into the weekend for the first time in his 23 starts on the PGA Tour. Here are three things you should know after the darkness-suspended second day of the Workday, the first of back-to-back events at Muirfield Village Golf Club in Dublin, Ohio.

Morikawa was 12-under by the time he reached the par-4 9th hole, his final hole after starting on the back nine. He would play on the weekend again. Now he wanted to make sure he would play last on Saturday.

Morikawa ripped his drive down the fairway, knocked his approach within about 7 feet and dropped the birdie, one of nine he made during his round. He finished with a 6-under 66 and a 13-under total through two rounds, three shots better than Kevin Streelman and Justin Thomas and four shots better than Hideki Matsuyama and Sam Burns.

“Obviously a really good start, making a lot of birdies, hitting really good approach shots, and for the most part, the game feels good from top to bottom, whether it’s off the tee, putting, approach shots,” said Morikawa, who a month ago lost in a playoff at the Charles Schwab Challenge, the PGA Tour’s first tournament after a three-month hiatus due to the coronavirus. “So it’s good to be back, and we’ve got two more days of the same thing.”

Also three shots back is Thomas, who shot a 5-under 67 and has yet to make a bogey in the tournament. Also bogey free on Friday were Matsuyama, who fired a 4-under 68, and Burns, who shot a 6-under 66.

Among players expected to make the cut were Patrick Reed, who was seven shots behind Morikawa; and Jon Rahm and Phil Mickelson, who were 11 shots behind the leader.

Who’s expected to be cut?

Among the players who were expected to miss the cut were Jordan Spieth, who shot two rounds of even-par 72; Brooks Koepka, who shot 74 and 69; and Justin Rose, who 74 and 80.