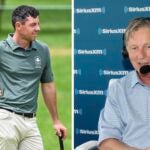 Rory McIlroy and Brandel Chamblee are worried about the effects of social media on young athletes.

On Thursday, when Rory McIlroy offered in-depth commentary on Simone Biles and the pressure athletes face, he said something interesting: “I certainly have a few more tools in my mental tool box to deal with things than I maybe had a few years ago.”

On Friday, after carding a second-round 66 to leap into contention, McIlroy was asked to expand on that thought. He wasn’t referring to on-course playing techniques, he said. Instead, he was referring to what he called “the everyday stressors of life.”

In McIlroy’s mind, one such stressor looms above all the rest: social media.

“I mean, I think one of the big reasons why people are talking so much about mental health right now is because how prevalent social media is,” he said. “There is a correlation there. And I think that removing myself from that has been a massive step forward for me.”

McIlroy has had an on-and-off relationship with social media over the course of his career, but he made a high-profile split with Twitter after getting into it with Steve Elkington in the summer of 2017. Elkington called him “bored” as a golfer and McIlroy fired back with a screenshot of the “Achievements” section of his Wikipedia page.

Days later, McIlroy explained the tweet — “I must have wrote that tweet and deleted it about five times before I actually sent it,” he told reporters at the time — and announced he was planning to log off for good. He told his wife Erica to change his password. The world of Golf Twitter was forever changed.

“I don’t need to read it,” he said. “It’s stuff that shouldn’t get to you and sometimes it does.”

That lines up with his current commentary on having strengthened his mental toolbox these last few years. It also lines up with a monologue from Golf Channel’s Brandel Chamblee earlier in the week, who went off on ‘Live From’ about the terrifying power of social media. He had a lot to say. Presented here, with limited commercial interruption, are some of my favorite excerpts from the segment.

It began with analyst and former Tour pro Notah Begay, who explained that athletes facing anxiety is hardly a new phenomenon, citing his own experience.

“Over the years Michael Phelps and I have become very good friends; he’s the most decorated Olympian in history, but it wasn’t golf or sports that connected us. We both went to the same recovery center in Arizona to work on our issues,” Begay said. “And it’s that connection and that communication that you have with somebody that’s dealing with similar type of struggle — and that’s why so many people have reached out to guys like Matt Wolff or Bubba Watson or in this case probably Simone Biles, probably just to lend a little bit of support and a little bit of compassion, because that’s what it is. You don’t necessarily need people to feel sorry for you, you just need people to say ‘Hey, we’re here for you in case you need us.’ That’s the network of camaraderie that enables somebody to start to develop enough strength within themselves to push forward through another day.”

Begay speaks with empathy and clarity on the matter. And Chamblee agreed, but pointed out that social media disrupts the natural networks that people used to rely on.

“Before social media came along, athletes were just buoyed for the most past by positive support everywhere they’d turn, because people they’d run into would have their best interest in mind. You go on social media, you don’t run into people who have their best interest in mind. You run into the most vocal people — they’re not random, they’re the people who are tweeting this vitriol at you are generally the most unhappy, angriest, most malevolent people that you will — well, you’ll never run across them, but you run across them on social media everywhere. And so you’re exposed to a never-ending source of hate on social media,” Chamblee said.

There’s no small irony in Chamblee and McIlroy aligning on this issue when they actually had an on-again, off-again social media feud some years back.

But now they’ve joined forces arguing that less is more when it comes to online engagement. And they seem to have a point, too.

Biles cited social media as contributing to “the weight of the world” on her shoulders. Matthew Wolff referenced social media, too, as a contributing factor to his own mental battles. And Xander Schauffele, the Olympics’ 36-hole leader, stays “old-school” off social media to avoid unnecessary distractions. Every athlete deals with the balance differently. Chamblee argues that they should do their best to avoid dealing with it at all.

“First of all, it’s addictive, it’s built to be addictive, the unpredictability of it even adds to the addictive nature of it, and there’s a direct link between time on [social media] and anxiety and depression, lack of sleep…and there’s an epidemic of mental problems amongst our youths today, especially our athletes,” Chamblee said. He also compared the unpredictability of the medium to a roulette wheel.

“It’s the occasional win that brings you back. That’s the thing. You go to social media, occasionally you get some nice feedback. But the way we’re all built is that we’re far more sensitive, we all have negative biases built in. We’re far more sensitive to negative comments and we remember them. I could sit here for an hour and say nice things about [Begay], but I say I don’t like your tie or your shoes and that’s all you’d remember. And it’s much, much worse than that on social media.”

In other words, if you’re a public figure you shouldn’t look to Instagram for positive reinforcement.

“It is not designed for your benefit. It is designed for purely the people who are designing those, purely to keep you addicted so that they can make money. Look, I’m on it. [Twitter] is a wonderful aggregate of news. But it’s a hell of a price to pay. I miss the old days of picking up a newspaper, because it didn’t come with such a weight.”

You can watch the entire clip here or, for maximum irony, share it on social media.