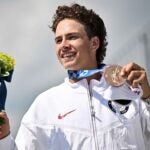 Skateboarder Jagger Eaton, who won a bronze medal in Tokyo, said he will likely celebrate on the golf course.

Of the many avid golfers who traveled to Tokyo this month, not all will vie for gold at Kasumigaseki Country Club. As has been the case in other Olympics, the contingent for the 2020 Summer Games is filled with elite athletes from other sports who love to peg it. Here’s a partial roster of those Olympians who hail from the U.S., plus a few golf-mad Americans from Games past. Not all of them can go low, but rest assured they all love to compete…

Golfiness: Jiro dreams of sushi, but Jagger dreams of golf. At least, that’s what he told NBC after his bronze-medal showing in street skating. “The dream celebration is me, my brothers, my little sister, all on a golf course, playing 18 holes of golf in Arizona right now,” Eaton said. “That is by far the dream.”

Golfiness: Whatever Hamilton lacks in shot-making stills, he more than compensates for with style points. How many other pro-am participants do you know who mark their ball on the green with an Olympic gold medal?

Golfiness: The three-time Olympic gold medalist was introduced to golf as a young boy and, by his own account, now plays to anywhere from a 10 to 18 handicap, depending on the day. (And you thought you could never relate to an Olympian!) Hancock is more consistent in a sport that’s known as “golf with a shotgun.”

Golfiness: Formerly known as Bruce, Jenner came to fame as the greatest all-around athlete in the world. Golf is yet another sport that she excels at. She reportedly plays to a 5.3.

Golfiness: Though not the only member of the Dream Team who plays golf (Charles Barkley and Larry Bird count among the others), he is the only one who built himself a course.

Golfiness: With a build that makes Bryson DeChambeau look scrawny, Kovacs has said that the length and fluidity of his swings depends on how heavily he’s been lifting. But in any case, he can muscle it out there pretty far.

Golfiness: A low-single digit handicap, Miller caddied for his grandmother when he was a kid and now serves as an ambassador at Moonlight Basin, the ski and golf resort that hosted the most recent iteration of The Match. The slope rating of that course is 153, or double-black diamond, in skier-speak.

Golfiness: Based on driving-range sessions she has posted on social media, Morgan appears to have a solid stance and a rhythmic swing with a sawed-off finish. In soccer terms, her miss is wide right.

Golfiness:  Now working as a color commentator in the Olympics, Phelps has also spent a lot of time working on his game. Since first appearing on The Haney Project as a 26-handicap in 2012, he has whittled his index down to about a 10.

Golfiness:  The SoCal native lists investing, sewing, woodworking and golf among her hobbies. Though she doesn’t keep a handicap, we’re going to assume that she’s pretty decent from the sand.

Golfiness: Word is that the champion grappler is keen on golf, but details about his game are difficult to — ahem — pin down.

Golfiness: Tatum took up golf during the pandemic but wasted little time finding his range. He can bomb it more than 300 yards.

Who will win a major in 2022? A novice's guide to a tempting golf bet

The smart way to bet $1,000 on The Fortinet Championship, according to an expert