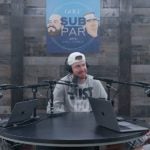 Before his internet fame, Bob Menery was a caddie in Los Angeles.

You may not recognize his face, but you definitely recognize the voice of Bob Menery. As the man behind the “R-rated sports network,” Menery has given his social following plenty of laughs as he provides sports commentary with no filter. Through his Instagram page, Menery has built a following of over 2.6 million people, hooking them with his witty, outlandish comments on the best highlights on the internet.

But before his internet stardom, Menery worked as a caddie at the posh Wilshire Country Club in Los Angeles. While there he got to loop for a laundry list of A-list celebrities — among them Green Bay Packers quarterback Aaron Rodgers. On this week’s episode of GOLF’s Subpar, Menery told hosts Colt Knost and Drew Stoltz the tales of his worst experiences as a caddie.

“You’d get guys that were just so bad at golf,” Menery said. “When you’re a golf caddie, the worst thing in the world is when you have four really s—– players that have no f—— idea how to play golf.”

For the “Caddyshack” faithful among us, this calls to mind a dispirited Tony D’Annunzio double bagging for the Havercamps at a sweltering Bushwood Country Club. Menery admits most of his encounters as a caddie were positive, but one celebrity holds the crown for his worst looping experience — actor David Arquette.

“David Arquette was a G when it came to tipping,” Menery said. “But his golf game struggled a little bit … (He) was probably one of the guys that was tough to go and chase balls for. I went into that round weighing 170 pounds. I left weighing 150.”

Hey, at least the tip was good.

Check out the full podcast below as Menery discusses the events that led to him going viral, his vision for an R-rated sports network and more.

‘Man, it was stressful’: What the intense pressure of a 4-footer for Olympic gold feels like