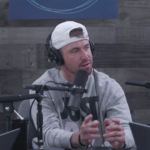 At this point, Bob Menery is no stranger to virality; the comedian and man with the “golden voice” has racked up over 2.5 million Instagram followers with his strikingly realistic sports broadcaster impressions. But success wasn’t always the case for Menery.

In this week’s episode of GOLF’s Subpar, Menery explains to hosts Colt Knost and Drew Stoltz the origin story behind the video that jumpstarted his career as a social media sensation.

According to Menery, the story began on the set of a friend’s music video, where he was an extra. During the shoot, Menery ended up sitting next to David Justin, a complete stranger at the time. Menery, who had practiced a faux sports broadcasting routine for years, began performing again when Justin pulled out his camera and started recording.

“The next day, my phone was like ‘bling, bling, bling, bling’ and kept blowing up like crazy…and I had witnessed what it was like to go viral on the internet, which was very interesting,” he recalls.

While the video inarguably jump-stated Menerey’s career — the notification overload was a double-edged sword. Right as his phone began to explode, Menery was teeing up with his friend Don Stanley at Stanley’s Member-Guest, which featured a $2,500 buy-in.

Menery, at Stanley’s request, eventually put his phone away and played 18 holes. His surprise when he returned? 316 missed phone calls from managers, agents, and newspapers.

Menery was an overnight sensation. Years later, his voice has become nearly as recognizable to sports fans as that of the broadcasters he imitates.

Menery’s succinct summary of what it was like to go THAT viral, that quickly?

“It was just weird.”