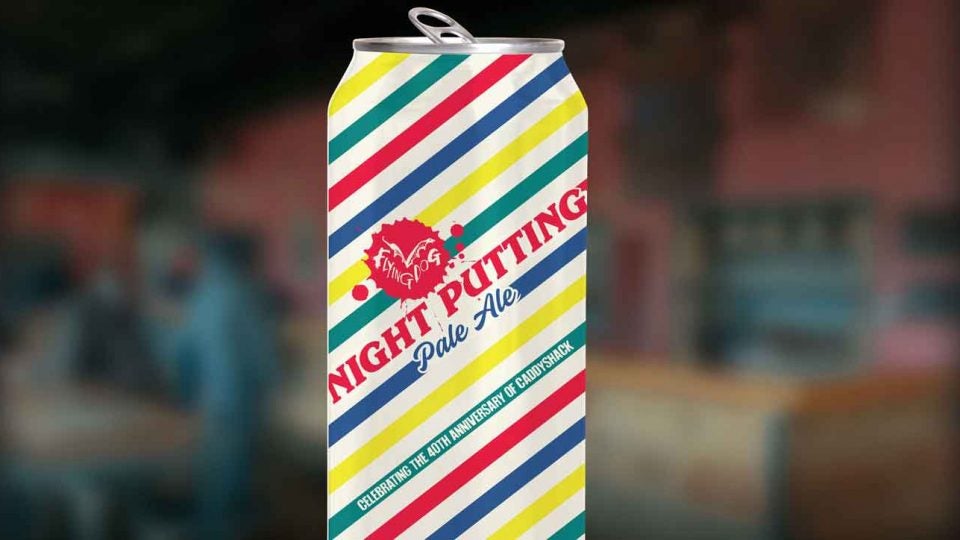 Al Czervik walks into the Bushwood Country Club pro shop and wants to buy everything. A half-dozen “Vulcan D 10” golf balls. Orange golf balls. And clubs, bags, shoes, gloves, a shirt and pants for his friend.

Czervik spots a hat on a mannequin near the register.

“Oh, this is the worst-looking hat I ever saw,” he says, looking at the fedora with red, green, yellow and blue stripes. “You buy a hat like this, I’ll bet you get a free cup of soup, huh?”

A few feet away, Judge Elihu Smails is wearing the same hat. He sheepishly rolls his eyes before taking it off, placing it on a golf bag and walking out of the shop.

“Oh, it looks good on you, though,” Czervik says.

Introducing Night Putting: Brewed in celebration of the 40th anniversary of Caddyshack, the greatest golf movie ever made. We've reinvented the classic pale ale to be less bitter and low enough in ABV that you'll avoid driving your cart into a water hazard...again. pic.twitter.com/gQMfWy7VGf

In honor of the 40th anniversary of the comedy where that scene played out, “Caddyshack,” Flying Dog Brewery in Maryland has released “Night Putting” beer. The pale ale is named after a line used by Ty Webb, played by Chevy Chase. The can is designed after the fedora that Czervik (Rodney Dangerfield) comments on and Smails (Ted Knight) is wearing.

“When conceptualizing this beer, we knew we wanted to pay homage to the classic comedy, so we created a beer designed specifically for golfers,” said James Maravetz, vice president of marketing at Flying Dog Brewery, in a release.

“This updated take on a pale ale is light and easy to drink without compromising on flavor. While we hope the novelty of the can and love for the movie will drive people to try it, we know the world-class beer inside will make them loyal fans.”

The beer is made with simcoe and centennial hops and oats, the combination giving the beer some bitterness but a smooth finish. It has a 5.5 percent alcohol by volume, making it easily drinkable during a round. Flying Dog beers can be found in 24 states — and it easily would have been found in Czervik’s keg in his golf bag.

After leaving the clubhouse, his group is walking down a fairway when his caddie, Tony D’Annunzio (Scott Colomby), puts down Czervik’s giant bag.

Near the green, Czervik presses a button, a tap pops up from the center of the bag, and he pours himself a beer.