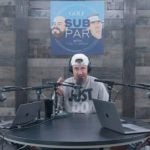 For anyone who’s ever watched a sporting event on TV and wondered, what would the broadcasters say if they could say whatever they wanted, Bob Menery wants you to know, he’s in the same boat. Menery has built a career and rabid following on his interpretation of the things the buttoned-up, silky smooth voices behind the microphones would say if they could speak to their mind’s content.

His raunchy, over-the-top highlight tapes of sports moments have earned him a social media following in the millions in addition to sponsorships with the likes of Buffalo Wild Wings. On this week’s episode of GOLF’s Subpar, Menery told Colt Knost and Drew Stoltz about a different kind of passion project: bringing his comedy to real-time with live sports broadcasts.

“My whole goal is to build the first-ever R-rated sports broadcast,” Menery said. “When you go to watch the NFL, you’ve got one way to watch the NFL. People take the NFL very seriously. You’ve got [Joe] Buck and [Troy] Aikman, [Jim] Nantz and [Tony] Romo. Well, what happens if you don’t want to watch the traditional style of football?”

Menery’s point, of course, is that if you don’t want to watch the traditional style of sports broadcast, you’re out of luck. You can either turn the volume off or not watch at all. But Menery has got other ideas. In an ideal world, he envisions a new kind of sports broadcast that follows his persona’s uncouth, no-holds-barred style of humor.

“I can call a game, I think, just as good as any of those guys can with a little bit of preparation and work,” Menery said. “My idea was to have a rotating color commentator. I’d have Bob Menery and — I’m shooting really high here — Steph Curry, quarter one. Bob Menery and Pat McAfee, quarter two. So I’m calling the game, but it’s a podcast style.”

And Menery’s twist on traditional sports broadcasting now has a realistic venue.

“The question becomes how do you do this? How are you going to be able to do that and use the NFL’s product?” he said. “Well, you go through Twitch. Twitch acquired the rights to Thursday Night Football. And you can do whatever you want on there, you can have your face on there.”

For now, Menery’s R-rated sports broadcast idea is limited to football, but ideally, he sees a future for the idea across every sport, including golf.

“So that’s the way I see it. I figure a way that you can go through Twitch,” he said. “For right now, you have to look at what you have access to. Twitch has the rights to Thursday Night Football, so for now, that’s my focus. And I’m going to be able to pull it off? Hopefully.”

To hear about the rest of Menery’s wild rise to stardom, including how he was discovered while playing in a Member-Guest tournament, watch the entire episode of Subpar below or subscribe on Apple Music HERE.

WATCH: U.S. Open contender collapses after his ball gets stuck in a tree