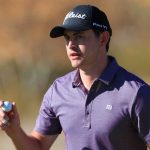 Two-time PGA Tour winner Patrick Cantlay recently joined the No Laying Up Podcast to discuss his injury history, personal tragedy, the Presidents Cup and more. Including his viral F-bomb caught on camera in Hawaii.

Playing the second round of the Sentry Tournament of Champions with Jon Rahm at the Plantation Course at Kapalua, the group was in mid-conversation when Golf Channel cameras turned to them on the 17th tee with mics on. Cantlay, talking to Rahm and his caddie, was heard saying “I’ve been waiting for this weather for 40 years; these pampered f—- need to play.” It was pretty easy to tell Cantlay was making a joke, but viewers started buzzing about the hot-mic moment on social media anyway.

Cantlay never clarified his comments afterward, but he told No Laying Up the story behind the story.

The second round at Kapalua saw unpredictable and challenging weather, including heavy rains. Cantlay said Rahm and his caddie, Adam Hayes, were talking about how it reminded them of the final round of the 2019 Open Championship at Royal Portrush in Northern Ireland, where the leaders had to play in a serious downpour. Rahm and Hayes mentioned that at one point during that final round a rules official told them to keep playing and they couldn’t hold for just rain.

“I was like adding to his story as he was telling it,” Cantlay said. “That rules official has probably been waiting his whole life to like tell some of these spoiled brat tour players to like hurry up and play and that was his moment in the British Open on Sunday, and he was going to be like pumped to get up in your ear and be like, ‘Hey guys, get going.’ I had no idea that was going to be obviously on camera and mic’d up, but that’s my fault and I gotta be better than that. But yeah it made for a funny moment.”

Cantlay also told his caddie, “Two more holes and we can get a Mai Tai,” which also circulated on Twitter, but Cantlay clarified that was in reference to the treacherous hills they had to climb all day. He said he really doesn’t drink during tournament weeks.

You can check out the entire podcast here.