Pro reveals why he ‘crumbled’ battling Tiger Woods down the stretch 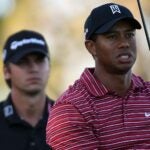 Tiger Woods bested Sean O'Hair at the 2009 Arnold Palmer Invitational by a shot.

It’s no secret that Tiger Woods is a generational talent on the golf course. With 82 wins, 15 majors and a highlight reel the length of a feature-length movie, he is unquestionably the biggest star the sport has ever seen. And if you ask his contemporaries, they’ll likely tell you the same thing, although Sean O’Hair might have summed it up the most succinctly.

“That guy is good man,” O’Hair said on a recent episode of GOLF’s Subpar. “He is really really good.”

O’Hair knows a thing or two about Woods’ game, too. The two played on a Presidents Cup team together in 2009 and went out for occasional practice rounds while on Tour. O’Hair also got the rare opportunity to go head-to-head down the stretch with the legend at the 2009 Arnold Palmer Invitational.

O’Hair entered the final round of the event with a five-stroke lead over Woods, but that deficit was quickly erased after a sloppy opening nine and some timely birdies from Woods. By the time they made the turn, the lead was one and Woods was in full-on attack mode.

“I just crumbled,” O’Hair said. “It was nerves … I wasn’t ready for that environment.”

The environment he alluded to was a hostile one. O’Hair was heckled and told he was going to choke all day long — something he’d never seen on the golf course before (or since). With O’Hair’s nerves combined with Tiger being Tiger, the outcome was never in doubt as Woods drained the winning putt on the final hole for his 66th career victory.

But it wasn’t all doom and gloom for O’Hair. A few weeks later, he lifted a trophy of his own as he won by a shot at Quail Hollow. And when he walked off the green, Woods was right there to congratulate him.

“It was definitely a highlight of my career, and something that I will remember,” O’Hair said. “It was cool for him to make that happen.”

Check out the entire episode of Subpar below as O’Hair discusses Anthony Kim, his Presidents Cup experience and more.