What’s it like recruiting Tiger Woods? One college coach recounts the wild ride 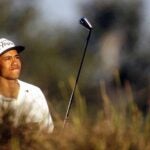 Tiger Woods was the most coveted golfer in the country coming out of high school.

Landing the signature of a generational talent can make or break a college football or basketball program.

Potential national titles, televised games and sold-out stadiums are at stake. Whiffing on, say, the top signal-caller in a recruiting class can prove to be costly — to the point that most schools are willing to pull out all the stops (some kosher and some not so much) to get their guy.

But what about a potential once-in-a-generation recruit in another sport? While most don’t receive the same red carpet treatment, there are a few exceptions.

During a recent interview on TexAgs’ LiucciCast with Billy Liucci, former Texas A&M head golf coach, J.T. Higgins, recalled the battle to land arguably the most coveted high school golfer in the history of the game: Tiger Woods.

At the time Woods was preparing to make his college selection, in 1993, Higgins was an assistant coach at UNLV (University of Nevada-Las Vegas), one of the top golf programs in the country. No one will ever confuse college golf recruiting with college football recruiting. Then again, Woods wasn’t just any high school golfer. Schools did everything they could to convince the baby-faced 17-year-old.

In the end, Woods’ decision came down two schools: Stanford and UNLV.

“We actually got a letter from the NCAA, telling us to make sure we had everything documented we were doing,” Higgins said on the podcast. “Because if Tiger chose [UNLV] over Stanford, we were going to be the first golf program to go under investigation. They didn’t think we could get him without cheating.”

(It wouldn’t have been the first time UNLV’s athletic department had been under investigation by the NCAA.)

Realizing it’d take a Herculean effort to sway Woods into passing on Stanford, UNLV got creative with their pitch when Woods made his official recruiting visit to Las Vegas.

Robert Maxson, UNLV’s then-president, knew Woods wanted to major in business (accounting), and Stanford didn’t have an undergraduate business program. So Maxson convened the school’s dean of the business school and the entire accounting department at his house for a luncheon to make the unconventional pitch to Woods.

“[Maxson] got up and gave a great talk and told Tiger, ‘I believe that college is supposed to prepare you for what you’re going to do for the rest of your life,” Higgins recalled. “And I if thought you were going to be an accountant and file people’s taxes, I’d tell you to go to Stanford. But you’re not. You’re going to be a pro golfer, and one of the best that’s ever lived. The reason these people are here today is to hear it from the top that their job is to help you in any way they can to get through college and work with you around your golf schedule.”

The pitch left an indelible mark on Woods. After touring the campus and the golf team’s facilities, Higgins believed Woods was ready to sign. And then mom came along to spoil the dream.

“[Tiger] was in,” said Higgins. “At the end of the day, just like so many coaches will tell you, it came down to mom. [Kultida] had her heart set on her son going to Stanford for his whole life — that’s where she wanted him to go. She wasn’t gonna let him go to Vegas. Earl loved us, and I think Tiger loved it in Vegas.”

In the end, Woods went on to sign with Stanford, where he won an NCAA title and three U.S. Amateurs before turning pro after his sophomore year.

“It came down to what school I would become a better person at,” Woods told the Los Angeles Times in 1993. “I figured, ‘What’s more important, school or golf?’ My entire life has always been school first, golf second, so why change now?”