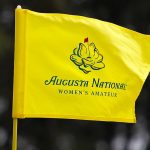 The field started with 82 players, but after the opening two rounds at Champions Retreat, 30 top amateur players are left standing. Their reward? A chance to fight for the title and history on Saturday in the final round at Augusta National. Here’s where we stand heading into the final 18 holes.

The final grouping on Saturday will appropriately feature the two players tied on top of the leaderboard. American Rose Zhang stayed consistent to begin the tournament at Champions Retreat, following up a 71 on Wednesday with an even par round on Thursday to grab a share of the lead at one under. Sweden’s Ingrid Lindblad opened slower with a 73, but rocketed up the leaderboard with a two-under 70, one of only three under-par rounds on the day. That left her locked with Zhang on top.

But their lead is slim. Another American, Auston Kim, sits one shot back at even par. She shares that position with Olivia Mehaffey, who would become the first Irish golfer to win at Augusta National if she were to hoist the trophy Saturday evening.

With several other players just a little but further back, anything can happen in the final round, especially on a Augusta National course that often invites drastic lead changes. That paired with the nerves every player will be battling on national TV sets up a thrilling day of golf, and a perfect preview of the course before next week’s Masters.

The final round was delayed one hour due to a frost delay Saturday morning. Below you will find everything you need to watch the final round, including updated tee times.

NBC will air the final round action at the 2021 Augusta National Women’s Amateur with three hours of coverage from 12-3 p.m. ET on Saturday.

How to stream Augusta National Women’s Amateur Final Round online

You can stream the broadcast of the Augusta National Women’s Amateur final round for free at ANWAgolf.com beginning at 12 p.m. ET. It’s also available for streaming at nbc.com/live with a subscription.