Toughest MC in golf? For one heartbroken ANWA competitor, it feels that way 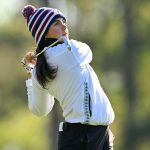 Alessia Nobilio experienced a different kind of heartbreak at this year's ANWA.

AUGUSTA, Ga. — The cut at the Augusta National Women’s Amateur may be the most brutal in all of golf. Only the top 30 women qualify for coveted Saturday tee times at Augusta National, arguably the biggest stage in the amateur game.

And while we remember the 2019 event for the collective giddiness and excitement we felt as Jennifer Kupcho outlasted Maria Fassi to make history, not everyone has such fond memories of the finale.

Two days before, 16-year-old Alessia Nobilio’s hopes of competing at Augusta were shattered when she found herself on the wrong side of an 11-for-10 playoff.

“I just went into the woods, crying,” Nobilio recalled. “I was really upset and didn’t want to see anyone.”

One of the toughest cuts in golf.

She readied her game for a comeback in 2020, but when the ANWA was postponed last March, Nobilio really had no idea when she’d get a second chance to play her way to Augusta.

When the ANWA was finally rescheduled, Nobilio knew her road back wouldn’t be easy. As a native Italian, her ability to travel during the pandemic was extremely limited; Italy’s restrictions were particularly stringent and border closures made international travel a challenge.

For those same reasons, she wasn’t even able to start her freshman year in person at UCLA and missed out on her first year on the Bruins’ women’s golf team.

“Starting college online with a nine-hour time difference isn’t exactly how I pictured it,” Nobilio said. ”I thought I’d be in L.A. and getting to play all these really amazing courses and work on my game with the team.”

But she found hope where she could. As lockdowns eased in Italy, Nobilio was able to get back on the course and start preparing for the 2021 ANWA.

Nobilio opened this year’s event with a solid round of three-over 75 at Champions Retreat. Given the cut line was expected to fall between five and seven over par, she was right in the mix. She got off to a hot start in difficult conditions on Thursday; on a day when birdies were at a premium, she jumped up the leaderboard when she played her first five holes in one under.

Nobilio arrived at the 165-yard, par-3 sixth hole ready to give herself another birdie opportunity. Instead, she walked off with a quadruple-bogey 7. Her chances of making the cut were immediately in serious jeopardy.

And memories of 2019 came rushing back.

“In most situations, I try to stay calm and be patient,” Nobilio said. “But I was really, really upset after the quad on 6. I just did my best to keep going, but I was thinking about it the whole time.”

It had been two years, but Nobilio hadn’t played enough golf to bury the scar tissue she’d built up in 2019.

The rest of her round was perfectly respectable, making three bogeys and nine pars to post a six-over 78 and a score of nine over 153 for the tournament. But it left her on the outside looking in; she missed out on the five-for-one playoff at seven-over 151 by just two strokes. In her mind, that meant just one hole.

“After how it ended in 2019, and how bad of a year 2020 was, it was really hard to know that I’d missed out on Augusta again,” Nobilio said. “I just wanted something good to happen this week.”

Friday’s round at Augusta National was bittersweet, given her desire to make the 30-player Saturday field and a second near-miss.

Big picture, this feels like just the beginning for Nobilio. She learned plenty. And she’s already working to get back next year.

“I’m a little short,” she said. “So working on distance is going to be big for me.”

The future is bright. Nobilio will have the full support of one of the nation’s best college programs behind her, and she’ll have the opportunity to play her way back to Augusta in 2022. Eventually, disappointment will be replaced by determination.

In the meantime, she’s got a long flight home and a few weeks in quarantine. Plenty of time to start laying out her goals for next year.