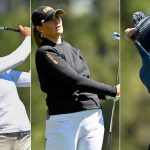 The final round of the ANWA will likely come down to the wire.

AUGUSTA, Ga. — There’s nothing quite like a final round at Augusta National, because you never know what’s going to happen.

With 13 players within four shots of the lead at the Augusta National Women’s Amateur, the tournament is likely to come down to the wire on a historic course that’s in peak form — and at an event that puts the women’s game on the biggest stage in the sport.

With that potentially thrilling finish in mind, here are five storylines you’ll want to keep your eye on heading into Saturday’s final round at Augusta National.

As players made their way around Augusta National in unseasonably chilly weather during Friday’s practice round, one thing became clear: The course conditions will be a huge factor in the final round. Many players noted how difficult the course was playing because of the cool temps and blustery winds — much different conditions than what the field faced at the 2019 ANWA, which saw near-perfect weather for the final round.

The greens are firm and fast, thanks in part to those winds drying them out. Austin Kim, who is tied for third at even par, called the greens “crispy.”

Olivia Mehaffey, who’s also T3, said she played a hybrid into several greens on Friday because of how cold and windy it was.

There’s a logjam at the top, with 13 players within four shots of the lead, with Rose Zhang and Ingrid Lindblad tied for the lead at one under.

Expect much movement as these women make their way around an Augusta National that’s playing as long and fast as it can for these players. Add to that the fact that they’ve only had one practice round to cram for the biggest test in golf, and the ‘board is primed for some big swings and an exciting finish.

There were four Swedish nationals in the field of 82 that teed off on Wednesday morning at Champions Retreat, and all four of them advanced to the final round at Augusta National.

Ingrid Lindblad, who attends LSU, is tied for the lead at one under. Linn Grant is tied for eighth at two over. Beatrice Wallin is T14 at four over, and Maja Stark, who won a five-for-one playoff to make the cut, is eight back. All three Swedes are capable of making big moves.

That’s because they’re all relatively long off the tee and roll the ball well, two skills that will be essential to tame Augusta National.

4. The Pluck of the Irish

Mehaffey, an ASU star from Belfast, could become the first Irish golfer to win an event at Augusta National (yes, before even Rory McIlroy). Her length will help her cause, as will her newfound confidence on the greens, courtesy of a new putter. In the second round at Champions Retreat, in blustery conditions, Mehaffey impressed with a three-under 69.

One other bonus for Mehaffey: she has the same caddie on her bag that helped Jennifer Kupcho win the inaugural ANWA in 2019.

Regardless of who wins, the top women amateurs playing on golf’s biggest stage will help inspire the next generation of girls to pick up the game and elevate women’s golf to new heights, as was Chairman Fred Ridley’s original intent when he first announced the ANWA in 2018.