#AskAlan mailbag: Do golf’s young stars have a problem closing? 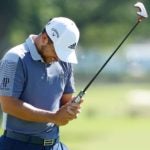 Xander Schauffele reacts after missing a birdie putt on the 72nd hole at Colonial last Sunday.

Why are the young guns so bad at closing? JT is 1 for 3 this year and even the win was in spite of awful shots at 18 at Kapalua, repeatedly. Bryson now has two 71st hole bogeys with the lead. Throw in Xander’s lip out, Jordan and Rory playing awful in contention on Sunday, etc. etc. -@brianros1

Winning a third of the time when you have a chance is, historically, pretty darn good. I think in this era of social media and wall-to-wall television coverage, every blown opportunity is examined and discussed in forensic detail, whereas in the old days guys could sputter on Sunday and it would go largely undetected. All that said, I agree it’s frustrating when so many would-be stars repeatedly fail to capitalize on their opportunities. Maybe they’ve been made soft by the money, or they’re scarred by the attention given to their crack-ups, or they’re over-coached and thus unable to fix the flaws once they’re alone between the ropes. Every player is different so it’s tough to generalize, but clearly the ability to close is one of the most precious skills in the sport.

Are you enjoying watching the 240 lb. incredible bulk that is Bryson DeChambeau averaging 330 yards off the tee? I’m not. Give me 310 yards from the 160 lb. weakling that is Justin Thomas any day of the week! -@TheGolfDivoTee

Watching Bryson right now is akin to going to the circus: it’s a thrilling, death-defying show that overwhelms the senses. I deeply admire DeChambeau’s obsession with improvement and the dedication it has taken to remake his body and swing. He has taken bomb-and-gouge to its illogical extreme and is deservedly reaping the benefits. Alas, if you watch a bearded lady swallowing swords four days in a row, week after week, at some point the thrill is gone. I was a little melancholy hearing the stat that the average yardage Bryson had left on Colonial’s par-4s was 110 yards. A proud course was reduced to pitch-and-putt, and the artistry of the sport snuffed out entirely. Hilton Head is another supposed shotmaker’s course, but if Bryson flies every dogleg it will play exactly the same as Colonial, which is to say, boring.

Berger asking to finish his putt in the playoff, dog move? -@FelipeLanus

I loved it. Alpha status.

Will Jordan Spieth ever return to form as one of the world’s best golfers? He seems so mentally broken when he gets into contention on the weekends. He makes mistakes that quite frankly you don’t see pros make i.e. chunk wedges, short putts missed, etc. -@s_ciech

Well, plenty of other pros missed important putts on Sunday, and from Hunter Mahan to Constantino Rocca, chunked wedges happen from time to time. But your thesis is correct that Spieth has looked alarmingly fragile over the last two years and he did make five brutal bogeys on Sunday to torpedo his chances at victory. Somehow, the near-miss at Colonial still represents progress. He played great golf for three days and on Sunday still hung in there despite the mistakes. I get asked about Spieth a lot in this space and my answer remains the same: he’s too tough, too smart and too talented not to figure this out. Of course, he had one of the greatest seasons in golf history at age 22; it’s likely he’ll never reach those heights again. Still, I expect him to claw his way back to the front ranks of the game.

Collin Morikawa 10 career wins: over or under? -@mcdonough

Under. Ten is a huge career. I love the kid’s swing as much as everyone else but blowing that short putt in the playoff was concerning. It’s not even the miss itself; that happens. But Morikawa stood over that ball forever, frozen. That hints at something deeper, especially for a guy who ranks near the bottom of the Tour’s putting stats. I hope he shakes this off and proves me wrong but the scar tissue from that miss will run deep.

What is the best/worst things about golf with no fans? Have you ever seen so many missed short putts on tour? -@Golfingbrock

I loved the look of the course: so pure and uncluttered without the grandstands and other detritus. The absence of obnoxious jabronis shouting nonsense was blissful. I did miss the ambient cheers on Sunday but only a little; the emotion from the players told us pretty much everything we needed to know about the magnitude of the moment. As for the putting, some of that was competitive rust, a lot of it is Colonial’s insistence on having bent grass greens despite the scorching temperatures of Texas summers. By Sunday afternoon the putting surfaces looked grey. They were so burnt-out and crusty I’m sure it affected the players, who were already trying to finish off one of the most unusual and stressful weeks of their careers.

Where does Colonial rank among the regular stops on the PGA Tour? -@SteveThomsonMN

Near the top. The ambience (in normal times) is great, the course a delightful throwback, and it enjoys a long, rich history. What’s not to like?

Did Rory flat out shank his second shot on #1 on Sunday? -@tdshambaugh

I think it was a semi-shank. Hosel-adjacent. But I have yet to see video of it! I know it was a skeleton TV crew at Colonial but he is the No. 1 player in the world! Whatever we want to call that shot it was clearly awful and Rory never recovered. It’s disappointing that he vanished from the telecast. I think it’s instructive and morbidly fascinating to watch top players come undone in the pressure of a final round, and Rory has had some doozies. I want to study it so I can better understand it.

Do you think Jack or TW is the GOAT? #badquestions -@JoeGunter

I always say this: Tiger Woods is unquestionably the most dominant golfer of all time. Jack – because of his longevity and consistency, the class with which he conducted himself, the grace he showed in many memorable defeats and sheer weight of the number 18 (and 19 runner-up in the majors) – is the greatest champion.

Comment on the contrast in the reaction/coverage of Vijay getting pilloried for entering a KFT event only to back out, while Luke List was praised for dropping down? Not critiquing/defending either, just curious about the inconsistent responses to the same thing. – @tahewett

The fundamental difference is that Vijay is a Hall of Famer with trillions in the bank who has largely forsaken the PGA Tour in favor of the old-guy circuit. A KFT tournament for him would be somewhere between a lark and spring training. List is a youngish guy trying to advance his career, which is theoretically the whole reason the KFT exists. He’s a full-time Tour player who would have loved to be at Colonial but didn’t qualify so it made sense for him to grind in AAA.

If you could only pick one player to win any week at any course for the next 10 years is that player JT? He has the most complete game IMO. #askalan -@BAIllini98

I think JT is the right answer, though Rahm deserves mention. So does Koepka, but given the serious injuries he has sustained over the last couple of years you have to wonder if his body will hold up for the next decade.

Excellent list. Don’t forget Phil’s spinout to cost him a 59 in Phoenix. Or Norman’s to lose in sudden death at the 1993 PGA Championship. Or Nick Price’s on the final hole of the third round of the ’86 Masters, costing him a 62. Or Tiger at the ’07 PGA, which also cost him a 62. Golf, man.

Rose is a slightly frustrating case, because he’s been close to transcendence but not quite able to get there. Still, a U.S. Open win (at Merion!), the Gold Medal, a stint at No. 1, 10 PGA Tour wins and a bevy of other victories around the world, an Order of Merit title, a FedEx Cup…when you lay it all out like that, I think he’s done enough to make it to the Hall of Fame. Any 23 year-old on the planet would be crazy not to sign up for that resume.

Is Sheep Ranch the best course at Bandon now??? -@GolferMurray

I don’t like to use “best” in this context. Sheep Ranch doesn’t have terrain nearly as interesting as Bandon Dunes or Trails. It is not the same kind of test as Pacific. But Sheep Ranch is outrageously fun and utterly charming. If I had 10 rounds up there I’d go 3 at Bandon, 3 at Trails, 2 at Sheep, 1 at Pacific and 1 at Old Mac. The beauty of Bandon is that everyone will split those 10 rounds up a different way, and we’re all right.