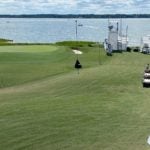 This view of the 18th green from a rental off the 18th fairway is usually blocked by grandstands. Not this year.

Two months ago, when the PGA Tour announced it was coming back to Hilton Head Island, S.C., for this week’s RBC Heritage, Julie Owens had an idea. Her parents, Joe and Kitty Pecko, had been quarantining in South Florida, and she knew they’d be game for a break. Especially her dad, a big golf fan.

So when Owens found a Sea Pines Resort rental off the 18th fairway at Harbour Town Golf Links, this week’s host venue, she called her parents.

“Why not rent this?” she asked them. “You can sit from the balcony, you don’t have to go outside, and there’s a kitchen here.”

And Pecko, who is now retired, is happy he did. He and Kitty checked in on Monday to a nice place with a glorious view of the 18th green at Harbour Town, complete with a balcony that can fit about 10 people. He keeps a pair of binoculars handy and has spent about three to four hours each day thus far watching golfers play the iconic par-18th in practice rounds. Kitty jokes they are going to tie a balloon onto the balcony railing so everyone knows where they are during TV broadcasts this week.

“We are on the third floor, so we have a perfect view,” says Pecko, who splits time between Tennessee and Florida and plays golf weekly. He used to be a regular at the Tour’s stop in Doral. “You can see the whole green. It’s a great spot. The views of the players and everything is perfect. I don’t know if you can get much better than this.”

No spectators are allowed on site at this week’s tournament, which begins today at classic Harbour Town, but that doesn’t mean there won’t be fans watching from their backyards or (like Pecko) perched up on balconies. The Charles Schwab Challenge kicked off the PGA Tour’s restart last week at Texas, but Colonial Country Club has parallel fairways, a big fence encapsulating it and virtually no homes along the course. Harbour Town is no Colonial. More than 500 homes and villas line its fairways, many of which are rental properties that were booked several months ago, or some gobbled up quickly when the Tour announced the new RBC Heritage dates. Now those vacationers are checking in — Saturday to Saturday is the usual duration — with pro golfers as neighbors. Capacity around this time of year is essentially 100 percent on the golf course.

“There are people out on that golf course who rented places, booked a year ago on family vacations, and all of a sudden, ‘What’s Brooks Koepka doing out there?'” said Steve Wilmot, the RBC Heritage tournament director.

Wilmot said they’ve been preparing for this scenario, and that the course (which is private property but available to resort guests), will be roped and barricaded where necessary, but he still expects to see many lounge chairs on decks.

“We’ve told people to be considerate and social distance,” Wilmot said. “But that’s going to happen.”

Owens is the general manager at The Inn at Sea Pines Resort, which has three golf courses, one of which is Harbour Town. The Inn has 60 rooms and usually is booked by sponsors during RBC Heritage week in April, but for this time a year it was only about one-third full when the new tournament dates were announced. Those other rooms were gobbled up quickly by fans. Of the 60 rooms, 30 are on the back side of the building and face the left side of the 1st tee box and 1st fairway. About a dozen of those have balconies, which will offer suite-like viewing of groups playing the par-4 opener this week.

Owens said there are strict rules on site so no one can come into the Inn if they aren’t staying there, and Inn guests still can’t get out to the course. But lucky golf fans who rented or live on the island already and those watching on TV will at least get a good show. The top-five players in the world highlight a field that consists of 114 Tour winners — the most in any field of any event since the statistic started being tracked in 2000.

“It’s anybody’s game and that’s what’s great about this golf course,” Wilmot said. “You don’t have to be a bomber, and it is strategic and it’s going to be a great week. We’re looking forward it at.”

Pecko said he’s enjoyed watching the pros hit their approach shots into the par-4 18th green, which sits under the iconic Harbour Town Lighthouse and is one of the most well-known golf holes in the sport. He’s spotted Rory McIlory and Ernie Els, among others, and is using his binoculars to read the names on the golf bags. He’ll have a better idea who he is watching when he can glance at pairings and tee times beginning Thursday.

Owens and a couple of other family members plan to join Joe and Kitty at their hot spot this week, especially on the weekend. Daniel Berger won last week at Colonial. This week is anyone’s guess. McIlroy has the best odds. Pecko was asked if his group plans to cheer loudly for the winner come Sunday evening, a small consolation for the thousands of fans who won’t be perched in grandstands around the green like previous years.

Just look for the balloon. They’ll have the best seat in the house.