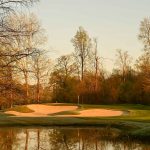 The 6th hole is one of three greens that was replaced ahead of the Augusta National Women's Amateur.

For the women teeing it up at the Augusta National Women’s Amateur, that standard has been carried over to Champions Retreat, the site of the first two rounds of the tournament.

If some of the bentgrass surfaces are slightly harder and slicker than others, that’s because last summer Champions Retreat replaced three of the greens on the Arnold Palmer-designed Island course, which is acting as the front nine for the ANWA. The new surfaces are on the par-3 6th, par-4 7th and par-3 8th, which had been struggling in the Georgia heat.

Because of the delicate nature of bent grass, Champions Retreat actually repaired the greens on every hole. Holes 6, 7 and 8 suffered the most damage from the sun, so the course opted to replace rather than repair those three greens.

While Champions Retreat has done an excellent job ensuring the course is in peak condition, Dori Carter, a University of Louisville assistant coach who’s on the bag for graduate student Lauren Hartlage, said she noticed subtle areas where new turf blended with existing turf on the holes where the greens were replaced.

“You could just kind of see what looked like new turf,” Carter said. “It’s blended really well so you wouldn’t know it, but the green played a little more firm than we thought.”

Carter said that overall, the greens are rolling “at around 11 or 12″ on the Stimpmeter. For comparison, the heaving greens at Augusta National typically roll somewhere between 12 and 15 during the Masters, which is why stellar putting often separates the champion at the end of the day.

The same is more than likely to be true of the ANWA winner.

Brianna Navarrosa, a University of Southern California freshman, is among the players who are embracing the speedy pace.

“I really like the way the greens are rolling,” she said. “Really fast, just like home. One of my advantages is my short game, so it could be really good for me.”

Thus far through the first round, birdies have been a premium at Champions Retreat, with a host of players tied for the early lead at one under. (For ANWA scoring, click here.) Final-round coverage of the event will begin at 12 p.m. EST Saturday on NBC.