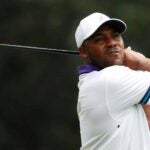 Harold Varner III is one of three players leading the Wyndham Championship after Round 1.

The first round of the Wyndham Championship in Greensboro, N.C. was suspended due to inclement weather in the area, with nearly three dozen players still on the golf course. Players who did not finish on Thursday will resume their first round at 7:30 a.m. ET on Friday, and the rest of the field will begin their second round as scheduled at 7 a.m. ET.

Here are three other things you should know after Thursday’s first round at Sedgefield CC.

The scoring is predictably low

Historically, the winner of the Wyndham generally needs to shoot a score in the high teens or low 20s under par for four rounds, and the first-round leaders are already well on their way.

Three players shot rounds of 8-under-par 62 on Thursday: Harold Varner III, Tom Hoge and Roger Sloan. Of the three, only Varner III was bogey-free, and all three players are seeking their maiden PGA Tour victory.

There are currently 87 players under par in the 155-man field.

Who else is contending?

What about Brooks and the other big names?

Sergio Garcia and Paul Casey are both 3-under after Round 1 (T25) while Tommy Fleetwood is 1-under (T67) and Jordan Spieth is even (T88).

Farther down the leaderboard are tournament headliners Brooks Koepka and Justin Rose, who shot 72 and 73, respectively, and have some work to do on Friday if they want to stick around for the weekend.